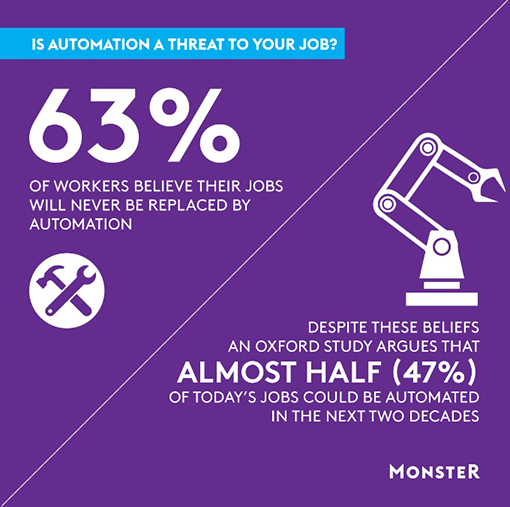 Robot Overlord Denial? Despite Research Indicating Otherwise, Majority of Workers Do Not Believe Automation is a Threat to Jobs

WESTON, Mass., April 16, 2015 -- An international poll conducted by Monster reveals that 63% of workers believe their jobs will never be replaced by automation (i.e., computers, robots); an additional 10% think it will take over 10 years for automation to do their job. Despite these beliefs, a 2013 Oxford study1 argues that almost half (47%) of today's jobs (in the US) could be automated in the next two decades.

Monster, a worldwide leader in successfully connecting people and job opportunities, asked visitors to their site the question, "When do you think automation (i.e., computers, robots) will be able to do your entire job?" and received over 3,800 responses.  International findings included:

Breaking down the numbers by region, German respondents are by far the most wary of job automation: 40% believe computers/robots are already able to do their job- the highest response rate in the category by over 25%. Workers in India are the most confident in their job security, with 67% answering that they don't think automation will ever be able to do their entire job. US respondents are also fairly skeptical about the mechanization of their jobs- 62% believe it will never happen.

"Though computers and robots are replacing some jobs, there are certain things they cannot replace," said Joanie Courtney, SVP of Market Development at Monster. "Emotional intelligence and soft skills are essential in today's economy, and furthermore- crucial to the development of future technologies and careers. As certain fields become outmoded, just as many have in the past, it's important to focus on building sectors that open up entire new professions  Additionally, as the Oxford study advises, workers who fear losing their jobs to automation should work on strengthening their creative and social skills to safeguard their necessity in the workforce."

The results of the current Monster International Poll are based on votes cast by Monster visitors from: February 2-16, 2015. Only one vote per user is counted toward the final tabulation. The Monster International poll, a product of Monster, the premier global online employment solution and flagship brand of Monster Worldwide, Inc., is a series of online polls that gauge users' opinions on a variety of topics relating to careers, the economy and the workplace.  These polls are not scientific and reflect the opinions of only those Internet users who have chosen to participate.

About Monster Worldwide
Monster Worldwide, Inc. (NYSE: MWW) is a global leader in connecting people to jobs, wherever they are. For more than 20 years, Monster has helped people improve their lives with better jobs, and employers find the best talent. Today, the company offers services in more than 40 countries, providing some of the broadest, most sophisticated job seeking, career management, recruitment and talent management capabilities. Monster continues its pioneering work of transforming the recruiting industry with advanced technology using intelligent digital, social and mobile solutions, including our flagship website monster.com® and a vast array of products and services.  For more information visit monster.com/about.