Clara Barton: Founder and Lifeblood of the American Red Cross 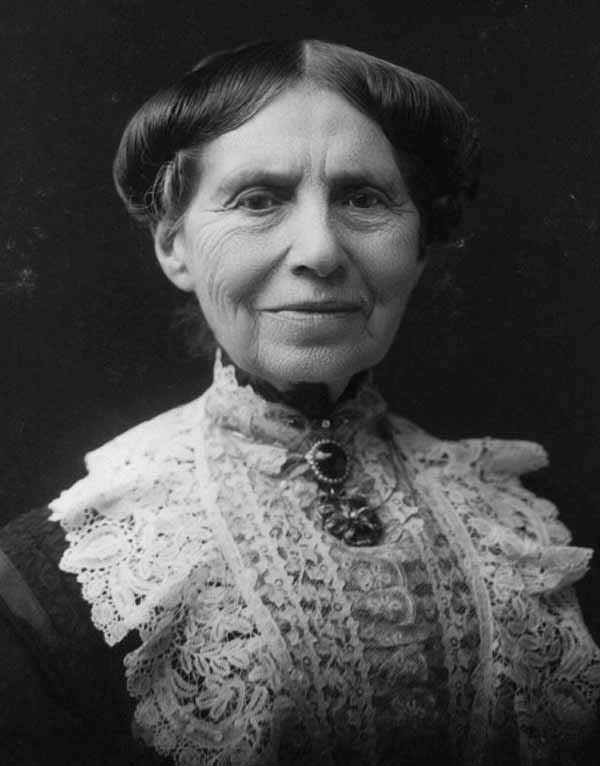 Clarissa Harlowe Barton—best known as Clara—founded the American Red Cross, an organization dedicated to providing compassionate care to those in need. The organization’s purview encompasses disaster relief, support for military families, lifesaving blood, health and safety services, and international services as part of the world’s largest humanitarian network in 187 countries. Here in the U.S., the Red Cross has nearly 600 chapters.

Clara Barton was a humanitarian and suffragist, and a focused, forward-thinking woman who paved the way for other women to succeed in areas not formerly open to females. Although we think of Clara as a famous nurse, she wasn’t ever “exactly” a nurse. Her impact on our nation’s health, however, remains clear, both then and now.

The youngest of five children, Clara, who was born in North Oxford, Mass. in 1821, taught school when female teachers were the exception. She later went to work for the federal government, another male-dominated work venue.

Her father had served in the Revolutionary War and had shared his battle stories with the inquisitive young lady. The articulate and well-read young Clara began a teaching career at age 15 and established a school in Bordenton, N.J. in 1853. Even after she dramatically increased enrollment there, town officials hired a male administrator instead of choosing her, and she resigned.

From 1854 to 1857, she worked in Washington, D.C. in the U.S. Patent Office as the Civil War began, not shy about making her opposition to slavery known. Perhaps because of her father’s influence, Clara also felt compelled to help soldiers at the Washington Infirmary who were wounded, hungry, and sorely lacking in clothing and basic supplies. She tirelessly collected necessities from various organizations and the public, wrote letters for the soldiers, and served as an “ear” for them.

Eager to share her altruism on the battlefields, in 1862 she got permission to work the front lines, bringing first aid supplies and most of all, compassion. Once there, she saw exhausted surgeons bandaging wounds with corn husks. In Virginia, Maryland and South Carolina, she attended to the wounded.

She later wrote a poem, “The Women Who Went to the Field,” describing nurses’ work on the battlefield, making it clear that they were there with a purpose:

"The women who went to the field, you say,

The women who went to the field; and pray,

Clara had gone with clear intention and direction, and was appropriately dubbed “The Angel of the Battlefield.”

When the war ended in 1865, Clara opened an office of missing soldiers in Washington, D.C., locating servicemen killed or still missing in action. She and those that worked with her answered over 63,000 letters to families wondering about missing family members and were responsible for locating over 22,100 missing men.

Clara then undertook a national lecture tour, which led to exhaustion. She traveled to Europe in 1868, where she learned about the International Red Cross. Excited about its possibilities, she returned to America in 1873, determined that the same type of organization could provide invaluable services here.

She founded the American National Red Cross in 1881, explaining that the new organization would be important not only during war time, but during national disasters caused by weather, earthquakes or fires.

Under her direction during the 1880s and 1890s, the Red Cross provided aid as a result of floods, tornadoes, an earthquake, a yellow fever epidemic, a famine, and supplied help in Cuba during the Spanish-American War.

A self-motivated and driven individual, Clara seemed unable to relinquish responsibilities to others, which ultimately did not play well within the ranks of the Red Cross. In 1904, she vacated her role as organization president at age 83, moved to Glen Echo, Md. to retire, and ultimately died of tuberculosis in 1912 at the age of 90.

Learn more about Clara at the National Park Service’s Clara Barton National Historic Site in Glen Echo. The service offers a captivating interactive virtual tour of her house, and shares that “Clara Barton's home served as national headquarters for the American Red Cross, a dormitory for Red Cross staff and a warehouse for relief supplies. There is not another house like this one in the entire National Park Service system.”

Special thanks to Donna Joly, associate director and outreach manager of the The Barton Center for Diabetes Education, Inc. in North Oxford, Mass. for the following fun tidbits about Clara. The center is also home to the Clara Barton Birthplace Museum. As the website notes, “Clara Barton's life of service has been a role model for generations of nurses, teachers, social workers, doctors, and allied health professionals.”

To find your historic calling in healthcare, make sure and see the great job opportunities at Monster.