How to sell your ideas—and yourself—to employers

Forget complex jargon and long pitch meetings. ‘Five Stars’ author Carmine Gallo says ideas that change the world are short and simple. Here’s how to be a more effective and efficient communicator. 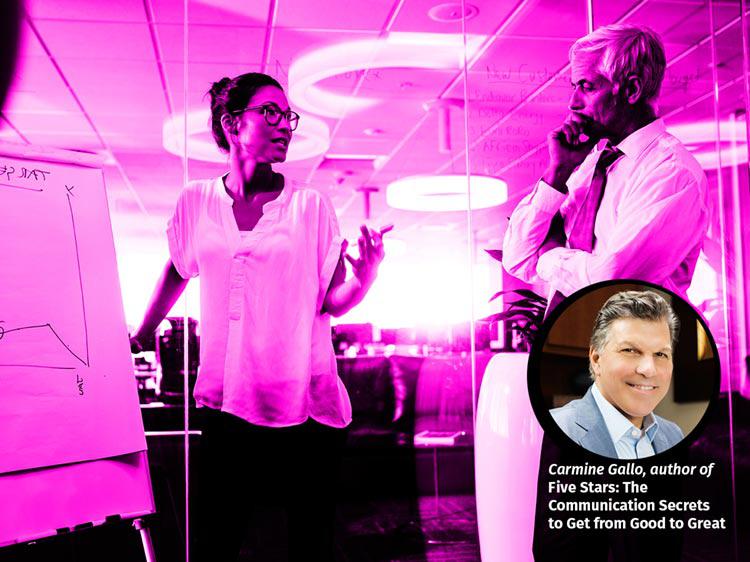 How to get people excited about your ideas.

Said more than a century ago, it still rings true today. The trouble is, we may yearn to spark lightning, but our best ideas too often get lost in a swarm of blinky little critters.

Carmine Gallo, author of Five Stars: The Communication Secrets to Get from Good to Great, wants to change that. A communications coach who counts Google, Coca-Cola, and Intel among his clients, Gallo has spent the past couple of decades analyzing how we express ideas, and how legendary speakers and writers (think Abraham Lincoln, Winston Churchill, and the co-founders of Google) got so good at it.

“In the age of artificial intelligence, we can create algorithms and robots that store and retrieve information far better, and faster, than we can,” he says. “But one area where humans still have an edge is in communicating ideas in a way that grabs other people’s attention and persuades them to take action.”

In fact, on Monster, “oral and written communication” is consistently a top soft skill that employers look for in job candidates. However, many of us were never really taught the most effective ways to communicate and, thus, lack this crucial job skill.

“Our educational system doesn’t teach us how. We’re just supposed to pick it up as we go along,” says Gallo, who teaches in the executive education program at Harvard Business School. “Businesspeople and MBA students constantly come up to me and say, ‘I have this fantastic idea! But how do I get people to listen to it?’”

Monster recently spoke with Gallo about the art of persuasion—including how to convince someone to hire you.

Q. Recent research in neuroscience confirms some very old ideas about how to hold people’s attention. Could you explain?

A. It turns out that the human brain is hard-wired to respond to storytelling, going all the way back to when we lived in caves and gathered around a campfire. Telling stories to engage people’s imaginations has been around for millennia.

Another thing that hasn’t changed is that every great story has the same basic, three-part structure. It starts by setting up a situation, maybe stating a problem or introducing a hero. Then, there’s a challenge or a hurdle to be overcome, and finally a resolution—a solution, or a triumph.

In business, the key is to use a story to combine facts and logic with an emotional pull. You want to convey information that also draws on your audience’s empathy.

Q. Most people think of storytelling as long and rambling, but you make the point that briefer is often better. Why?

A. Geoff Ralston, a partner at [venture capital powerhouse] Y Combinator, told me, “If a story is too complicated, it doesn’t stick,” adding that entrepreneurs only have five seconds to get investors’ attention in a meeting before they start checking their smartphones for messages and otherwise drifting away. That may sound harsh, but several neuroscientific studies have shown that we all make up our minds about a speaker within seven to 15 seconds!

So, try to refine your idea until its essence can be told quickly. The most famous example is probably how [Google co-founders] Larry Page and Sergey Brin expressed their idea to their initial backers: “We want to organize the world’s information and make it accessible.” If you can’t sum up your idea in one sentence, keep working on it until you can. As [British billionaire entrepreneur] Richard Branson once told me, “Any idea that doesn’t fit on a beer coaster is rubbish.”

Q. You make a strong case for ditching jargon and complicated words in favor of shorter, simpler words. Why?

A. Businesspeople tend to think jargon and long words make them sound smarter, but it turns out, the opposite is true. The human brain responds to short words, even for complicated concepts. [Astrophysicist] Neil DeGrasse Tyson once said, “Putting things in terms people can understand isn’t ‘dumbing it down.’ It’s making a complex idea concrete and familiar.” If you want people to remember what you write, keep it at a third-grade reading level, as Winston Churchill did.

Q. What advice do you have for communicating well in a job interview?

A. Interviews are great storytelling opportunities! You usually don’t have much time, so when an interviewer says something like, “Tell me about yourself,” don’t waste time rattling off your resume. They don’t want jargon and bullet points; they want what I call your signature story, meaning who you are and how you became that person. Weave the storytelling steps—set-up, struggle, and resolution—into the conversation. Interviewers will remember that far more readily than your degrees, or titles, or awards.

Another good thing to keep in mind is the Rule of Three. The human brain seems to be wired in such a way that we like things to come in threes. If the interviewer asks, “Why should we hire you?” don’t give 18 reasons. Think of three reasons, and in the interview, say, “Here are three. First…” and tell what they are. Neuroscientific research shows that, once someone knows there will be three points, they have to hear all of them. It’s almost uncanny.

Have strong communication skills? Make sure you include it on your resume. A strong resume is the first step to a successful job search, so it’s important to communicate your skills and experience in a professional, yet simple manner. Could you use some help with that? Get a free resume evaluation today from the experts at Monster's Resume Writing Service. You'll get detailed feedback in two business days, including a review of your resume's appearance and content, and a prediction of a recruiter's first impression. It's a quick and easy way to pitch yourself to potential employers.