How to Manage an Office Romance 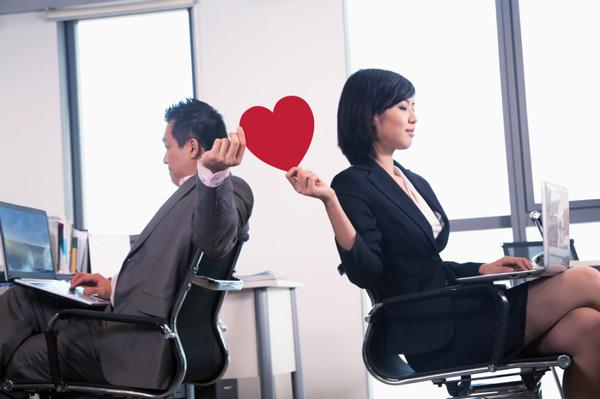 Working in an office, it’s real easy to get to know people. Their favorite foods, sense of humor, it all becomes common knowledge as you spend eight-plus hours a day with them, Monday through Friday. As such, it’s no surprise that people find love in the office.

A 2006 study conducted by the Society for Human Resource Management (SHRM) found that as many as 40 percent of people have found themselves in an office romance and six years later, a Workplace Options survey found that 84 percent of millennials say they would engage in romance with a co-worker, which may indicate such relationships aren’t nearly as taboo as we might think they are.

Stigmatized or not, however, navigating the waters of love in the workplace can be a tricky endeavor. So, if you have Valentine’s Day plans with a co-worker this year, we’ve got some things to keep in mind as you celebrate the love that blossomed in the cubicle.

To start, do your homework

Make sure you're aware of your company policy regarding workplace relationships.

“One of the most interesting pieces of information that came from [the Workplace Options] survey was that 34 percent of workers said they didn’t know if their company had policies governing romantic relationships in the workplace,” said Dean Debnam, chief executive officer of Workplace Options, in the press release.

In most companies, dating policies fall in the following groups:

Disclosing your relationship may put you at risk of disciplinary action (even as severe as termination if you don't follow your company's dating policy) but with the relationship out in the open, it’s easier to not let it impact your work performance. You won’t be constantly thinking about hiding it because, well, there’s nothing to hide. The thrill of sneaking around is a temporary one. Of course, prior to entering the relationship, you should know whether your employer even allows for such romances but we all know love doesn’t exactly abide by a certain set of rules. So, be sure to be transparent.

Now that it’s out in the open, refrain from being 'open' (No PDA!)

How’s that for a paradox? Despite approval from human resources, in the workplace, you and your partner aren’t partners. You’re co-workers. It’s not so much that you should be worried about how others might view your public displays of affection but rather to show that both your work and treatment of other co-workers won’t waver.

This is especially important when dating a superior, if even allowed, or subordinate or someone that works in a different department (the SHRM study also suggests the majority of workplace romances happen between people in other departments). Do everything you can to squash the perception that your boyfriend or girlfriend is receiving special treatment because of your relationship.

Ready yourself for possibility of jealousy…and its consequences

Being aware of how people perceive you is hardly the only thing to be cognizant of. If you thought jealousy was an unfortunate staple of a regular relationship, it’s a big red stapler in office romances. You need to prepare and be ready for things like promotions. What if you’re both going after the same one? This type of competition can create resentment and jealousy.

Lastly, they say love is compromise. If yours is real, love of the serious variety, you two might want to have a serious conversation about one of you looking for a new job. It sounds counterintuitive to push away the one you love but spending every waking hour with someone, from breakfast to the water cooler, to bed at night, can take its toll. See if you might not want to turn that office romance into a regular old love life.