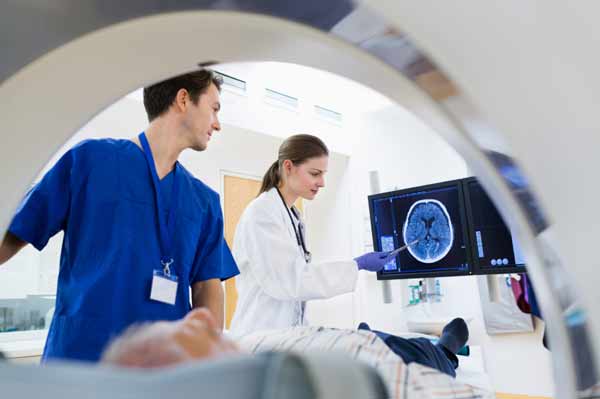 Radiologic technologist Myke Kudlas can vividly recount a litany of mesmerizing stories that illustrate why the job epitomizes the well-worn phrase, “never a dull moment.”

Now the Chief Academic Officer at the American Society of Radiologic Technologists, (ASRT), Kudlas, MEd, RT, (R)(QM), CIIP, once worked at a top academic medical center. There, he seemed to “go everywhere” during the course of a never-typical workday, he says.

“I performed radiographs in the OR and ER and in patient’s rooms. I went to pain clinics, the speech pathology department, and other offices,” Kudlas says. He reflects upon some of the more unusual experiences that kept work—and life—so interesting and fulfilling.

“Once I was in the OR when a patient’s liver was removed for me to do a radiograph and then it was put back. An hour later, I might have taken an x-ray of a construction worker who had a large nail lodged in his skull,” he says.

Performing intricate diagnostics doesn’t always go the way it’s described in a textbook, says Kudlas. What seems to be isn’t always what is, as with an x-ray that seemed to reveal cancer on a patient’s upper thigh. Later the patient confessed that he’d had a cough drop in his pocket, which brought a welcome smile of relief from Kudlas.

“Sometimes the job felt like I was on the [CBS crime drama] TV show, ‘CSI,’” he says.

How They ‘Picture This’

When you broke that arm, or underwent your annual mammogram, or had that heart “echo,” you were treated by a radiologic technologist. The job is defined as a medical professional who performs diagnostic imaging examinations and administers radiation therapy treatments. According to ASRT, more than 325,000 working registered radiologic technologists or RTs in the U.S. must learn about:

Additionally, radiologist assistants are experienced RTs who’ve obtained additional education and certification. This qualifies them to serve as radiologist extenders to work under the supervision of a radiologist.

Radiologic technologists may specialize in a specific imaging technique such as:

Radiologic technologists who specialize in radiation therapy or delivery of high doses of radiation to treat cancer and other diseases are called:

How to Get There

You need an academic degree, so you must attend:

Next, you’ll take a certification exam from an agency representing your specialty area. The  largest, the American Registry of Radiologic Technologists, requires RTs to earn 24 continuing education credits every two years to remain registered. Different registries and boards have different requirements. Specific registration and continuing education requirements vary from state to state.

States set licensing and regulation requirements. Some states have comprehensive licensure standards while some have none. See licensure requirements for every state here.

What You Can Expect

From its 2013 Wage and Salary Survey, ASRT tells us that the overall mean annual full-time compensation for RTs across the nation was $62,736, depending upon discipline, position, experience, education, location and other factors.

Here’s a demographic profile of the average radiologic technologist:

An Evaluation of Job Prospects

When asked about the effects of the Affordable Care Act (ACA) on the profession, Kudlas says there’ve been no major changes to RT roles and responsibilities. “One would surmise that with greater access, there’d be a greater demand for medical imaging, but we really haven’t seen that yet,” he says.

The constantly-evolving nature of the profession adds extra impetus to the need for continuing education, he says, and that means professional growth.

Sonography seems to offer the most job opportunities, Kudlas says, but ASRT data show that the job market for radiologic technologists is fairly tight. “We think we may have reached equilibrium between supply and demand right now. A lot of efficiencies are built into medical imaging now versus a decade ago, when everything was film-based—now it’s digital,” he says.

To be a successful RT requires use of both sides of the brain, says Kudlas. “You need a really strong technological base, but you also need patient care skills. We call it ‘high tech, high touch.’”

He surmises that approximately 20 to 25 percent of RTs are or have been photographers, either professionally or as a hobby. Visual skills really help with this healthcare career, and so do people skills.

“I love my job, working with people, and dealing with the challenges I’m presented,” says Steve Cohen, RT, (R) at OrthoIndy, the largest orthopedic surgery group in Indiana and tenth largest in the U.S.

Although trauma isn’t pleasant for the patient, he finds it an ideal opportunity to use what he’s  learned over the years. “It’s interesting when you can’t always get the ‘perfect’ view like a textbook picture depicts. You have to improvise and patient positioning becomes so important,” Cohen says.

His tip to you if you’re bent on a great RT job: “Be ready to move, even out of state. So many students trying to enter the field means there may not be a lot of openings where you are.”

Don’t be discouraged and go get the job you want. Make sure to check out the radiologic technologist openings here on Monster.