Steady paycheck or my dream job? These 4 questions will help you decide 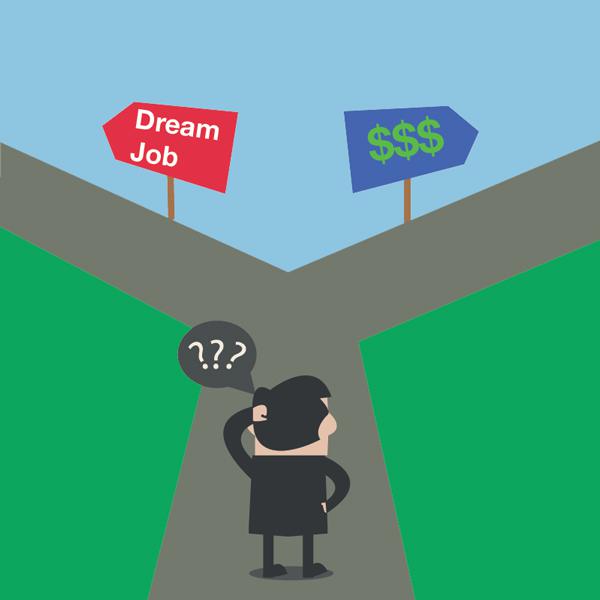 Selling out. Getting stuck in a field you don’t want to be in. Compromising goals, values or dreams. These are scenarios we can only be so lucky to encounter in the working world. The job market is tough enough at this point that we may never even have to choose between what we want and what we need. For those of you who find yourselves at a junction between what you want for your life and what your life has offered you, this can be the most agonizing decision to make.

Recently, I was looking to make a move after a year at my first job. In the space of two days, I was offered a job at a desk (a BIG desk) in an office (where I had been working for a year and was getting a little cabin feverish) and a gig as a producer on a potential new TV show (outside, on set, exactly what I wanted do with my life). It was the hardest decision I ever made.

Here are questions you need to ask yourself first that helped me make my decision and tips on navigating this very scary conundrum.

What do you really want?

Ask yourself that. Then sleep on it. Then ask yourself again. If it’s in a constant state of flux, that’s likely a side effect of the common condition of being young and indecisive. It’s not out of the question for a young person to be totally sure of what they want and it could even run parallel to what you need in your life. That being said, it is important to recognize that what you think you want today and how you pursue that can have deep and lasting effects on your life.

Got a dream? Cool. Dreams are the fuel of success but it’s important to be pragmatic and forward-thinking. You’re not in school anymore, decisions matter.

How are you really going to achieve it?

While it is very true that it takes 10,000 hours to get good at anything, those hours will all go to waste if you don’t have anywhere to take your hard-earned skill set. Making connections and marketing your abilities is as important as having them, if not more. Think of all the people you see succeeding at what you want to do. There’s a reason they are successful and that is because they made a connection and then convinced that connection to pay them. Skill is the cornerstone to success, but without the proper networking it can only take you so far.

Thus, it became clear to me that taking a job on a TV show that very well might not get picked up was a way worse decision than taking a job doing something that isn’t my ultimate dream but I'd be working for someone who could help me achieve that ultimate dream.

Do you really have options?

Sometimes you are offered two jobs in two days. Sometimes you don’t get a call for months and you sit on your bed wondering why God hates you. If the latter is true and a job you aren’t crazy about comes up, you should probably take the money and run. Yes, getting stuck is a thing. But if you are assertive enough with your own career, you won’t stay long at a job that isn’t right for you.

Are you ready to work really hard and wait a really long time?

No matter which ladder you choose to climb, you will start at the bottom rung, unless your dad/professor/college roommate knows someone, then you start at the second rung. Either way, it’s a long way to the top and while you do see youngsters skyrocket to success, most of them are auto-tuned pop stars who will be in rehab by 30.

Just about anything worth succeeding at takes serious effort and a serious amount of time. You have to recognize that you are in it for the long haul and if a job that will give you good connections presents itself and you’re worried about being stuck somewhere you don’t really want to be for a year, think of it in broader terms. Do you want a career so short that one year will define your happiness with it? I hope not.

As for me, I made the right decision. I chose the job with the prestige, the connections and the security of the steady paycheck. I chose the desk.

Call me a sellout, but A LOT of thinking went into this, as well as consulting of my professional mentors. The more I talked about it, the more it became clear that the adult (and ultimately right) decision was to go with the more stable opportunity, for it truly holds more potential.

It was a great decision; they didn’t even make one episode of that show.

Monster Wants to Know: Have you ever had to choose between a paycheck and your dream job? What did you do? Share with us in the comment section.