Employers are looking for somebody who can find, select and analyze information, then turn it into a solution. 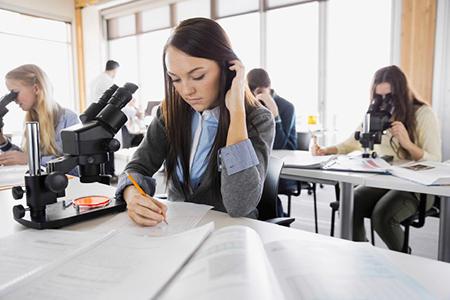 Students on technology tracks in college aren't the only ones who have information skills in their portfolio that they will apply to their careers after graduation. In the Information Age, well-honed information skills are a must across a variety of careers.

Project Information Literacy (PIL) surveyed early adults and their research habits, especially how they resolve issues of credibility, authority, relevance, and currency in the digital age, conducted in partnership with the University of Washington's iSchool.

"Employers don't care about majors," said PIL's Director and Principal Research Scientist Alison Head. "What they're looking for is whether somebody can find information, select it, analyze it and then apply it to some sort of solution and talk about what those solutions are."

"Whether you're in computer science, engineering, education or even occupational majors like nursing, that's the important takeaway from college," she added.

The sentiments of the post grads in the PIL survey echo those in another study performed for the Association Of American Colleges and Universities by Hart Research Associates. In that survey of more than 300 employers, 93 percent of them agreed with the proposition that “a candidate's demonstrated capacity to think critically, communicate clearly, and solve complex problems is more important than their undergraduate major."

Head noted that an important part of critical thinking is the ability to ask questions, but it's also a skill not fully appreciated by college grads. In the PIL survey, only 27 percent of the grads said asking questions was a critical thinking skill they used in their post college careers. Moreover, of all the majors, the respondents who valued questioning the least were those who majored in computer science.

That could impact those grads ability to innovate in the workplace. "The whole emphasis across any industry is to innovate," Head said. "Whether you're working at Hewlett-Packard or Google and you have a degree in computer science, you're going to be asked to come up with new ideas, and I would argue that questioning is a fundamental part of examining a situation and looking at possibilities."

Employers appear to agree. In the AACU study, 95 percent of the employers said they give hiring preference to college

graduates with skills that will enable them to contribute to innovation in the workplace. What's more, more than nine in 10 agreed that “innovation is essential" to their organization's continued success.

The diminishing ability to ask good questions could reflect a trend in education and among students to concentrate on strategic rather than deep education. "The strategic learner intends to simply make high grades and get academic honors," explained Ken Bain, president of the Best Teacher Institute. "That sounds like a good thing, but it has major limitations."

"Because they predominantly just want to make a high grade, they will not be risk takers, they are not people who follow their own curiosity," he said. "They tend to learn procedurally instead of conceptually and as a result, they tend never to become what we call 'adaptive experts.'"

The AACU study suggests that those kinds of thinkers aren't being released into the workforce by colleges in universities. Two in three employers (67 percent) believe most college graduates have the skills and knowledge they need to succeed in entry-level positions, but only 44 percent think they have what is required for advancement and promotion to higher levels.

However, creating deep learners at a time when testing has become a substitute for knowledge is posing problems for educators. "That's the crisis of higher ed.," PIL's Head said. "Our findings come out at a time when educators want to teach students to go through the process of deeper learning and to ask and develop their own questions."

"Yet,” she continued, "this study is showing that's not happening. We've got a bunch of strategic learners on our hands. They're good at taking tests, but not coming up with new ideas and solutions."