“When to Jump” author Mike Lewis says you should pay attention to your daydreams because they might just be nudging you toward a leap into your ideal job. 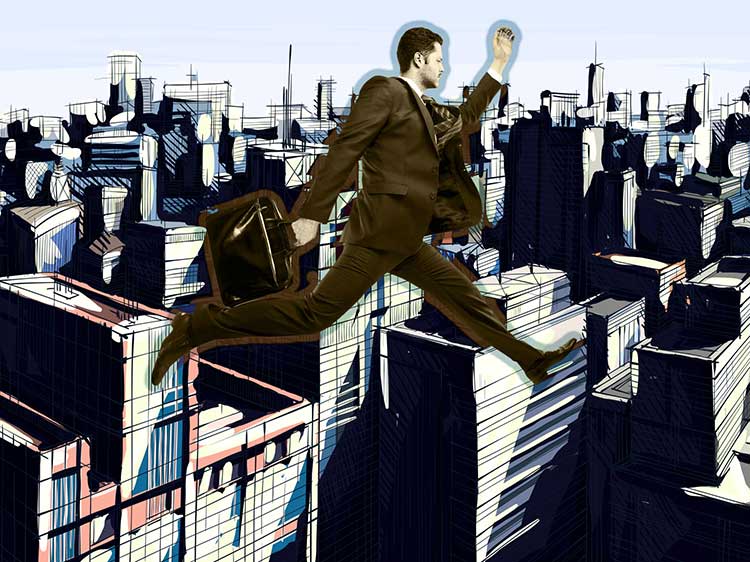 Two years out of an Ivy League college, 24-year-old Mike Lewis snagged a high-paying job with Bain Capital Ventures, a finance arm of prestigious consulting firm Bain & Co. He knew he should be happy. After all, only a tiny percentage of candidates for jobs like this are chosen, so getting hired at the firm, he says, was “like winning the lottery.”

Yet, an avid and skilled squash player, Lewis found himself spending more and more time “staring at the wall” in his office, daydreaming about quitting his job to play squash. “What you have in mind is absolutely crazy,” said a friend to whom he confided his secret wish. “But there’s a difference between crazy and stupid.”

Over the next few years, not only had Lewis made his daydream come true, but he also found hundreds of other people who had made similar jumps—including a publicist who became an Episcopal bishop, a garbage collector who is now a furniture designer, and a commercial banker now running a brewery.

Along with colorful profiles of other successful career changers, or “jumpers,” Lewis’s new book, When to Jump: If the Job You Have Isn’t the Life You Want, offers a practical, four-step road map for anyone thinking of following the “little voice” inside that keeps urging a big career change. “Whether you jump now or later, this book will be here,” Lewis writes, “so you won’t have to jump alone.”

Monster recently spoke with Lewis about how to go after the job—and life—you really want.

Q. Your book lays out a four-step process for pursuing a whole new career. Could you briefly describe the four steps?

A. The first one is listening to that little voice. At this stage, you may be trying to ignore it, but you find yourself more willing to, at least, consider doing something about it.

In Phase Two, you’re deciding to take action—jotting down ideas and making a budget. You start tackling the nitty-gritty.

Phase Three is what I call letting yourself be lucky. Once you have planned, dreamed, and worried as much as you can, you’re ready to run with whatever comes your way from now on. No jump can be fully predicted or planned out before it’s made, so don’t try to get every detail nailed down. You’re going to find your luck.

And in Phase Four, you’re pushing on with this jump—or toward your next one. You’re not looking back.

Q. How do you know your “little voice” isn’t leading you over a cliff?

A. I believe the “little voice” is the honest and authentic voice you should listen to when it’s giving you the same message over time. In today’s world, we are bombarded with noise and distractions over every kind of medium and technology, so it’s hard to determine what’s worth listening to and what’s not.

But if you distill it all down over time, there will be fewer voices, and perhaps only one, that remains constant. It’s the one you can’t shrug off or ignore—no matter how hard you try. As terrifying as it may be to listen to your deep inner voice, it certainly won’t be as terrifying in the long run as hearing it constantly, but never responding.

Q. In all your conversations with fellow “jumpers,” what was the biggest obstacle they had to overcome at the outset?

A. From what I’ve seen, the biggest hurdle is simply fear of the unknown. On the one hand, we know exactly what we’ll give up if we go for it: a certain income, a familiar routine, our current social status. But in pursuing something we care about, we know very little, if anything, about how it will go or where it will end. Yet, in my own case and every single one of those I wrote about, it’s there in the unknown that your luck will be discovered. You just have to jump to reach it.

Q. You’re now making a second jump, from squash player to author, and several people in the book have jumped more than once, too. How do you know when it’s time to jump again?

A. I think as soon as something feels comfortable, set, certain, and a bit mind-numbing, if we’re honest, it’s time to jump again. In fact, most people will reach that point in any dream they’re chasing.

For me, it was while I was sitting on a flight to Bulgaria and thinking, “OK, I’ve done this, I’ve lived out my dream.” I’d just bought a domain name and was busy collecting stories for my blog, whentojump.com. That’s when I decided to write my book, which is the anchor to my broader, online platform that features monthly newsletters and weekly podcasts that include practical advice on following your dream as well as an online learning program. Right now, I’m focused on building this community of “jumpers,” so your journey might be crazy, but it won’t be stupid.