How Fantasy Football Can Work For You in the Office 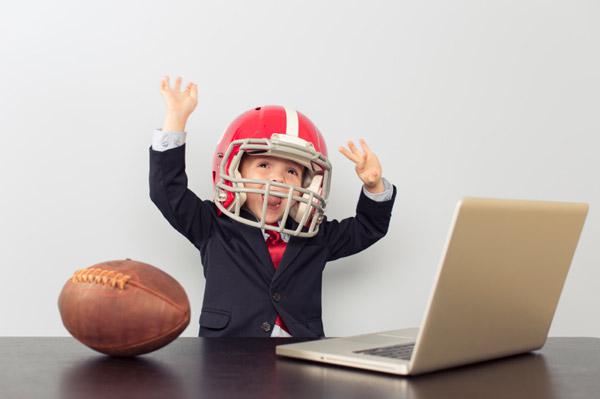 Fantasy football is sweeping the nation, more than 33 million people in fact, according to the Fantasy Sports Trade Association, making football inescapable for those who don’t care and even more exciting for those who do.

"Fantasy football is a massively popular phenomenon that cannot be ignored. No one can deny that it is a common source of workplace chatter around water coolers and lunch tables throughout the season,” said John A. Challenger, chief executive officer of Challenger, Gray & Christmas in a press release.

In fact, Challenger argues that more companies should embrace the phenomenon and recruit employees into company-wide leagues, as a way to build morale and camaraderie among workers.

“Companies that not only allow workers to enjoy fantasy football, but actually encourage it by organizing a company leagues are likely to see significant benefits in morale, which, in turn leads to an overall boost in productivity as well as employee retention,” said Challenger in the release.

Being a part of an office’s fantasy football league and culture presents great social opportunities. With football as the unspoken true American pastime, there is a unifying dynamic to following the game, with Sunday’s gridiron goings-on becoming the stuff of water cooler legend.

Here are some great tips on how to take advantage of these opportunities.

You Don’t Care About Football, So What?

Now that we’re out of high school, it’s not necessary to pretend that we care about sports to impress the jocks. That being said, football is outrageously popular. I work in an artistic industry, but the vast majority of my office is all about it. It’s not so much “if you can’t beat ‘em, join ‘em” so much as: “why not give it a try?”

The Draft is a Major Social Event

Anytime a fantasy football draft is scheduled, it is the opportunity to gather with the other members of your league and revel in the sprouting of the competitive roses.

If you are in an office environment, this can be accomplished very conveniently after work. You’ve already got a room filled with computers built in. Make sure not to spill queso dip on the copier though.

The workday is long and unless you are in an office that operates under complete silence, fantasy football banter can be a great way to pass downtime. This is when subtle trash talking can fly freely (though emphasis on the subtle). When you don’t have anything interesting to talk about, you can let the interesting actions of professional athletes talk for you!

Winning Isn’t Everything, But It’s Something

It’s important to maintain your image through your fantasy team. It’s all too easy to get into a losing funk and lose interest, but keeping a respectable record (or even a winning one) provides confidence.

I could write articles on articles on how to succeed in fantasy and there are a LOT of people who are paid to do just that and that alone. The most important key to success is to actually check your lineups often. Players go in and out of injuries and forgetting their bye week is an easy way to drop a win by leaving the wrong guys in the game and/or on the bench. Chances are there will be someone who drops the ball or doesn’t care and it’s important to be the person that pounces on those opportunities rather than be the one pounced upon.

Those who succeed in fantasy are seen as gurus to those who are not so successful. I have been very successful thus far this year and I am asked for advice on a weekly basis.

The best-case scenario of this is when I am asked by an executive for help with her team. Her fantasy woes were a great icebreaker and I get 20 minutes of face time with her every week to go over her team. A foot in the door is a foot in the door.

Keep It Competitive, But Keep It Professional

Fantasy is great. It makes The Cleveland Browns interesting and gives you a truly solid excuse to bond with co-workers. That being said, it also holds the danger of being a distraction. Challenger, Gray & Christmas took a whack at guessing how much employers lose in productivity due to fantasy football – their guess – $14 billion (they too that gauging the level of lost work from fantasy football "absurd"). But at the end of the day, fantasy success doesn’t truly equate to abilities in your actual job unless you work for ESPN.

Apply the same grain of salt to your fantasy proceedings as you would to any social interaction at work. There’s a time and a place. If need be, come up with a code word to keep things under the radar. When fantasy banter got too out of a hand at a restaurant I once worked at, we started referring to it as “dinner service.”

Whatever you do, make sure you stay focused on what you have actually been hired to do and use fantasy as a welcome but moderated distraction.

Monster Wants to Know: How has fantasy football helped build work relationships or friendships from the office? Share with us in the comment section.