Sometimes, it’s not what you say, but how you say it that gets you ahead at work. 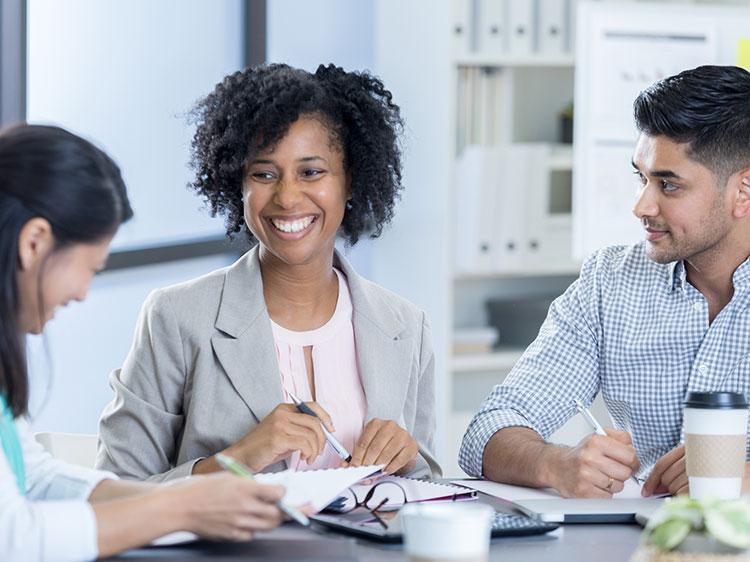 Learn how to add more confidence to your skill set.

You’re speaking up at a meeting, meeting with your boss, or talking to a client, but your voice is shaking, you’re not looking anyone in the eye, and—oh no—you’re totally losing your train of thought.

Confidence goes a long way in the workplace. In some cases, people rise up not just because of the quality of their work, but because of the confident way they carry themselves and present their ideas.

“The even better news is that with a little practice you will not only sound more confident, you'll feel it too.”

Ready to channel your inner self-confidence? Monster spoke to experts to find out how to believe in yourself, so others will believe in you too.

Winging it is no way to win it.

Even seasoned trial lawyers bring notes to the stand.

“No one will fault you for bringing reference notes to a presentation, meeting with your boss, or conversation with a client,” says Jana Tulloch, founder of HR consulting company, Develop Intelligence.

“If you feel that using notes will make you look less-than-professional, it won't. It shows that you are thorough and interested in making sure that you cover all the points you want to during the presentation or discussion.”

Try to resist the urge to read your notes verbatim, though. Glance at them only when needed. Simply knowing your notes are nearby if you need them will make you more confident.

Focus on your audience

If you take the focus off of you, you might actually be less self-conscious, and therefore, more confident.

“Focus on what your audience needs and what you want to accomplish for them,” says Dr. Christine M. Allen, president of executive coaching firm Insight Business Works.

“It will help you let go of the worry thoughts because you’re thinking about your audience, not yourself.”

Another advantage of focusing on the people you’re speaking to is that you’ll be able to read the room and adjust accordingly.

If they seem to be thinking more about what they should get for lunch than the meeting at-hand it’s time to shift to the next topic on your agenda, sound more enthusiastic. Or, order pizza.

Think about a time you’ve realized someone felt nervous, shy, or guilty.

They probably were looking down, across the room, or at anything other than you.

“Confident people don’t shy away from eye contact. Look at people when you speak and more importantly, look at them when they speak,” says Evy Poumpouras, a former U.S. Secret Service agent.

“It shows that you are listening and care about what they have to say. It also sends the message that you are sure of yourself and your abilities.”

“Nothing says confidence like eye contact,” says Halpern. “It shows that you mean what you say and you're not afraid to say it and is especially important when communicating bad or difficult news.”

If you’re giving feedback to a team member, fessing up to a mistake, or telling a client that things didn’t go quite as planned, don’t look away.

Meandering, pausing, stumbling or using filler words will only lessen your appearance of confidence, so try to not to use any of those crutches.

“Practice being direct and conveying what you want to say without the caveats that detract from the facts,” Weinberg adds.

Unless you’re running an auction, it’s helpful to slow down your speech.

“Hurried speech is a strong indication of nervousness and sends the message that what you have to say isn’t that important.

“Slow deliberate speech implies that you are thoughtful and what you say matters,” says Poumpouras.

“Confident people sit upright and take up space. Their chest is open and shoulders are pushed back. Their body sends the message that they deserve to be there.”

Your body language matters even if you’re on the phone and people can’t see you.

“Maintain good posture, because it reminds your body that what you’re doing is important. When possible, take calls at a desk in a chair that forces you to sit up straight, not slouched,” says Weinberg.

Get in the right mindset

Michael Phelps’ angry face may have been a viral meme, but in the end, he beat his rival and won an Olympic medal.

“The point is to do something that puts you into a confident mindset. Any action that makes you feel powerful will alter your psychological mindset,” explains Poumpouras.

Take a cue from Rachel Platten and find your fight song. You’ve got this.

Put your confidence to the test

Think you're ready to master this confidence thing?

One great way to test it out is by going on interviews. Even if you’re not desperate for a new job, it’s always a great idea to keep your options open.