How I became a professional mountain biker

Becky Gardner's job may just be the most fun you can have on two wheels. No office required! 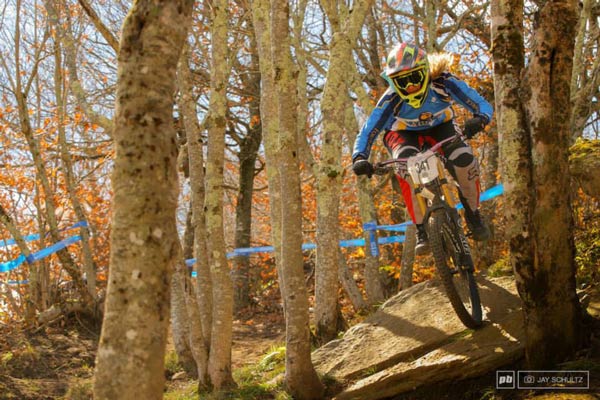 Becky Gardner takes to the hills at Collegiate Nationals.

Becky Gardner's last outing to a BMX bike park ended with disaster. “I broke my back trying backflips,” the 24-year-old casually explains.

For most people, this would be a life altering injury that’d make them reconsider doing anything remotely physical again. For Gardner, it goes with the territory of being a professional mountain biker.

Though her sport encompasses various styles of biking—including BMX, dirt jumping, road biking and cycle cross—Gardner’s specialty is downhill racing. She rides on the collegiate, national and World Cup circuits, traveling from coast to coast to race against top competitors.

In this field, you don't aim to get to the top of the mountain. You ride down it at 35 miles per hour toward the finish line.

How she got into racing

Growing up in the Hudson Valley, a region full of mountains and miles of bike trails, Gardner was a natural athlete. Initially, her passion was soccer, but the injuries she incurred began to wear on her and by the middle of high school, she was ready for a new challenge.

“I really liked riding because it’s always hard," she says.

She found a small race to compete in, which led to others and others.

How she upped her game

When she’s not studying and racing for the school, her travels take her to national races throughout the country leading up to the World Cup: a competition that requires you to have enough points from national races to be considered and then to qualify again once you get there. That competition only accepts 20 women.

How she started making money

Naturally, talent and physical prowess are key aspects of being a successful mountain biker. But making a career out of it—that is, one that actually pays—requires something else: sponsorships.

Prizes from races can vary anywhere from to $200 to $1,500 in the U.S. so mountain bikers like Gardner look to sponsorships to help boost pay and cover costs.

Gardner is currently sponsored by Kona Bikes, e*thirteen, FOX, Smith Optics, Deity Components and DHaRco. While she doesn’t get paid directly by them, she gets all the gear and parts she needs, in addition to having travel expenses covered depending on the race.

“Networking is as important as being good rider,” Gardner says. “If you want to do this for a living, you’ve got to polish your people skills.”

She describes the process of getting sponsored as a sort of courtship.

“The hardest part is finding ways to talk to these people," she says. "So many people write to them so you have to differentiate yourself. The bigger companies are at races themselves, so you get a chance to interact with them face to face. The best way is to reach out to them directly at a booth at a race.”

What advice she has for others

If you want to make it as a pro rider, winning races is the most important thing you can do. If you’re not winning races, sponsorships will be tough to come by.

To keep your skills sharp, Gardner says, “ride the things you’re bad at. A lot of people think doing the same thing over and over again is going to help them, but the problem is that they do things that are easy for them, over and over again.”

“I grew up riding with some of the best riders in the world," she adds. "I didn’t get a handicap and I sucked for a while. Then, one day I won a race by two minutes and realized how much I’d improved.”