How to disagree with your boss without losing your job

Clashing with a higher-up can be career-killing, but a few strategies can make it much more manageable. 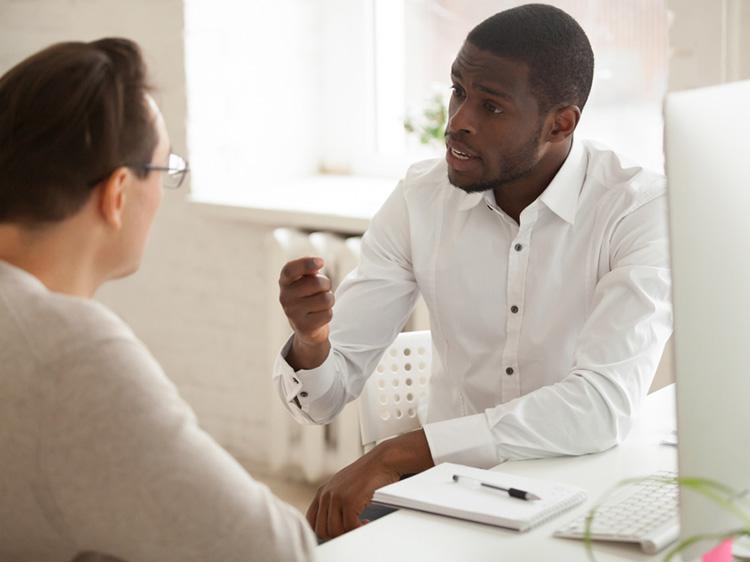 You can disagree. If you do it the right way.

It’s tricky when you have a beef with your boss. How do you disagree with a person who most likely hired you—and has the power to potentially fire you?

Say something, and you run the risk of being seen as difficult or even adversarial. Stay silent, and you could seem ambivalent or complacent.

“I think we have a lot of fear about bringing up opposing ideas because we think it’s going to create conflict,” says Rebecca Vertucci, career coach and principal at the Vertucci Group.

“But your boss wants you to be successful. Often we’re surprised by being able to say something and it not going as poorly as we thought it was going to.”

Your company hired you because they think you’re an asset, so bring your experience and point of view to the table—but do it strategically:

Bringing something up at an inopportune time can spell doom for whatever issue you’re trying to address.

“I think what happens is that people feel like their opinion isn’t important, so they bite their tongue a few times,” says David Couper, a career and work expert in Los Angeles. “Then, they’re in a meeting and disagree in the heat of the moment. Then it becomes really heated.”

“I worked with a Big Five partner, and the easiest way to get him was to grab him in the hallway between meetings and give him two to three facts about why I disagreed,” Couper says. “Nine times out of 10, I would succeed.”

Key in any negotiation is understanding what the other side values. The best way to get them to listen is to be able to reflect back to them that you understand what’s important to them.

This might take some detective work on your part.

“It may be that you have to ask some good questions, because you may not understand what’s behind the decision or action that you’re disagreeing with,” says Tammy Gooler Loeb, a career and executive coach in the Boston area.

So before you state an opposing view, “You have to understand what it is you’re disagreeing with at the root.”

You can use this information to frame your suggestion as something that’s different from theirs—but that still serves your boss’s ultimate purpose or priority.

Step 3: Make it their idea

If you present information in the right way, you might change your boss’s mind about things—and let her come to her own conclusion.

The way to do this gracefully is, “you kind of accept what they’re saying (even if you don’t agree with it), come back to them, talk about other issues, and if you’re smart enough, they come up with the new idea, which is kind of what you wanted,” Couper says. “They’ve just changed their mind because you’ve given them information.”

This approach will usually take more than one discussion, so don’t give up. Plan on having a few conversations over time to make this happen.

“When managers and bosses are dealing with their team, they get a lot of the brunt of what’s not working and the complaints,” Vertucci says. Remember that your boss is trying to look good, just like everyone else, and if you can help her do that, you’ve got a greater chance of success.

“You may not agree with them, and you may have some constructive feedback, but if they feel like you are trying to help them shine, they will be more open to your ideas.”

No matter what, make your thoughts known while there’s still a potential opportunity to take action.

“Sometimes people will bring up a dissenting point of view after the fact, when no one can do anything about it, and that’s just not productive,” Gooler Loeb says.

That said, it could be that it’s too late already—and you just don’t have enough information to know that. But to the extent that you can, act promptly.

Step 6: Be prepared to lose

There’s always a chance that you’ll speak your mind and nothing will change. And you have to mentally prepare for that possibility.

“Your point may be taken, but it may not be taken well, in that it’s not going to change anything,” Gooler Loeb says. “It doesn’t mean losing your job, it just means you may have to comply with something that your boss feels is the best approach.”

If that’s the case, give it your best can-do attitude. “Take that lemon and make lemonade,” Gooler Loeb says. “Try to learn from that or understand it, even if you disagree with it. Trying to understand it will help you at least be able to support it.”

Step 7: Be prepared to leave

If you find yourself in one of those jobs where you can’t seem to see eye-to-eye with your boss about anything—or she never seems to want your feedback, it might be time to look for a job where you can respect your manager a bit more. Or, where your ideas can be heard.

Join Monster and you can upload five different versions of your resume, so you’ll be ready to send the right one out as soon as you see a good match. We’ll also email you new jobs as soon as they’re available, so you can jump on them and get yourself in a job where you’re growing in your career—not butting heads with your boss.