Before the big guy makes his annual global rounds, he sets up shop next to Hot Topic. 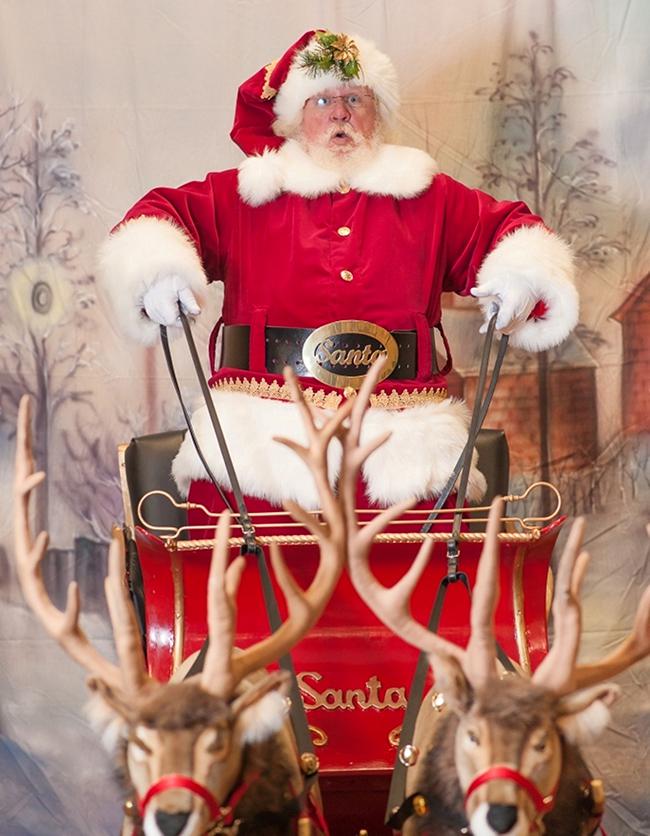 It’s hard to get Santa on the phone this time of year. This is obviously the big guy’s busy season. It’s also the busy season for those who don the red outfit and shaggy white beard to play Santa Claus at the mall. Across the country, these doppelgangers delight thousands of children eager to give Mr. Claus their wishlists in person. Yep, it’s beginning to look a lot like Christmas, and that means it’s a mall Santa’s go time.

For those who spend their days as jolly Saint Nick, the season starts well before you might think. Professional Santas prepare for months ahead of the big day. And the job isn’t as easy as you might guess. But being a holiday hero can also be very rewarding as these Santa experts reveal.

How Santa is hired

While it’s not unheard of for a mall to directly hire a Santa, most shopping centers work with event agencies or photo companies, says Susen Mesco, founder and director of the Professional Santa Claus School in Denver. Given that the on-season is the time between Halloween and Christmas, most jobs are already filled by October.

There are no real universal qualifications to land the job of mall Santa, but you should enjoy working with children, the mall Santa’s primary customer. Many places like to hire Santas with real beards, but Mesco says plenty of police officers, firemen, or military service members also moonlight as Santa and can’t have full, bushy beards. Also, fake beards are becoming more realistic, so this is less of a barrier now than in the past.

Mesco says there are also more opportunities these days for Santas of different ethnic backgrounds. Mesco’s school trains many of the professional Santas you see working today.

“We learned some Spanish, some sign language, how to answer hard questions and even how to work around reindeer,” says Joel Florida, a retired police officer from Flint, Michigan and a former professional Santa. With so many of these well-trained Santas available, it’s harder for an untrained Santa to get hired.

A typical day for a mall Santa

Santa pulls long hours: Malls don’t want to have children see Santa A leave for lunch and be replaced by Santa B, so they typically don’t rotate Santas.

Your shift depends on the particular mall’s hours of operations and your arrangement with your employer. Generally, a shift will be between six and 12 hours, and if you start in the morning you’ll likely be working all day, Florida says. In that time, you’re talking to a steady stream of children, all sharing their Christmas wishes, asking sometimes tricky questions, and swearing up and down that they’ve been good. It can be hard to find a moment for a break, he says.

What Santa is paid

Mesco says most retail establishments pay between $15 and $20 per hour for Santa, though this varies by region and depends on the arrangements with the agency or photo company. Most companies also provide the suit, though some Santas like to use their own.

Why it’s not an easy job

There is definitely some heavy lifting that goes into being a Santa Claus at the mall. You will see many kids, they all want to sit on Santa’s lap, and it’s often Santa picking them up, Florida says. That can be quite the workout.

Another occupational hazard of being the man in the red suit? Sick kids who are giving Santa some germs along with their wishlists. Mesco teaches her Santas to eat properly and care for themselves to help stay healthy.

Then there are the tough questions. Children feel safe confiding things to Santa they sometimes won’t tell to other people, and it can be challenging to see a child in those circumstances. Kids talked to Florida about experiencing a loss or their parents’ divorces. He was also in the suit the season after the Sandy Hook tragedy and says it was hard on some children.

Why it’s an amazing job

While it’s not as easy of a gig as it may seem, the experience can also be make you feel pretty jolly.

Mesco, in the 2011 documentary about her school, Becoming Santa, gets choked up when discussing the importance of maintaining the fantasy and seeing the wonder and excitement on children’s faces.

Florida says the children were delightful and said a lot of funny things. While he’s not able to do the full shifts as a retail Santa anymore, he enjoyed being the big guy so much that he still does it from time to time as a volunteer, visiting hospitals. He still enjoys the warm feeling of making a child’s day.

“It’s definitely more rewarding for the Santas than the children,” he says.

Want to fulfill your own wish of playing Santa Claus at the mall? Join Monster for free today. As a member, you can sign up for job alerts—yes, even mall Santa job alerts—so you're notified as soon as positions become available.