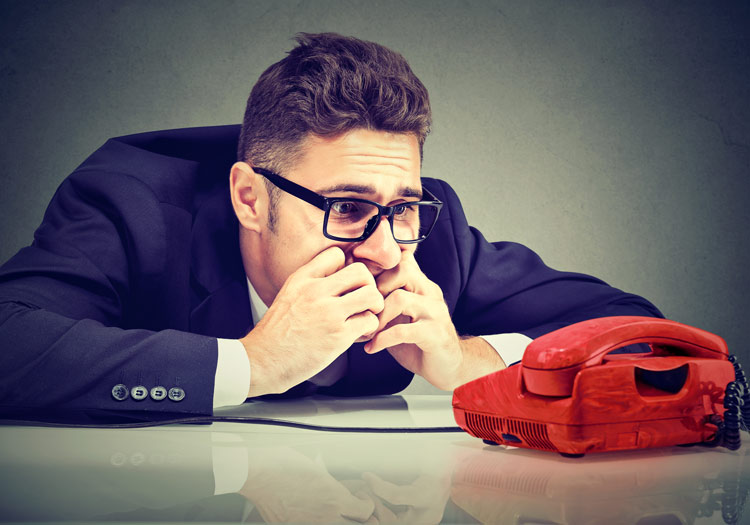 Remember the kids in class who raised their hands to every single question the teacher asked and flailed their arms around, all while wincing and whimpering, “Pick me! Pick me!” Yeah, those kids were the worst. Their desperation looked bad then, and it looks bad now.

The standard definition of “desperate” means “having lost hope.” And the Oxford dictionary really drives it home: “feeling or showing a hopeless sense that a situation is so bad as to be impossible to deal with.” Does that sound like something prospective employers want to deal with?

Unfortunately, if you hate your job or have been unemployed for a while, you may be feeling a little desperate. But letting that feeling show during your job search can be detrimental.

“When candidates are feeling desperate, negative, or cynical, the employer can smell it a mile away,” says Ford Myers, author of Get the Job You Want Even When No One’s Hiring. “Desperation is a total turnoff. Instead of opening more doors for the job seeker, these behaviors close doors to new opportunities.”

Why? Simple: One key to impressing a hiring manager is making them feel special, like they’re the one. A tiny bit of flattery can go a long way. Think of finding a job the same way you’d go about finding a significant other. “When you’re single, it’s not appealing to say, ‘I’m willing to date anyone.’ It’s the same thing when you’re applying to jobs,” says Steve Dalton, author of The 2-Hour Job Search: Using Technology to Get the Right Job Faster.

Toeing the fine line between being eager and seeming desperate can be tough, but it’s crucial. Avoid the following five signs that make you appear just plain desperate to employers.

Applying to multiple positions at the same company

We get it: You’d do anything to work for the incredibly cool, cutting-edge, mega-successful company that’s the leader in its industry. However, applying willy-nilly to jobs at that company will not increase your chances of getting hired there. This is a huge turnoff to many employers, says Dalton.

Regardless of how passionate you are about the company and its brand, when you submit multiple applications for various positions, it can make you appear unfocused.

“Employers want to see that you’re a great fit for a particular job,” explains Portland, Oregon–based career and job search coach Vicki Lind. “That can be hard to accomplish when you’re applying for every single job that opens at a company.”

Instead, Dalton says to mention during a job interview that you’re open to other roles at the company. (“I’m applying for this job because it sounds like an exciting opportunity and I think I’d be a great fit, but I’m open to other open positions as you see fit.”)

You should always follow up with a hiring manager after a job interview. Not touching base can make you seem uninterested in the position. But checking in too often can make you look desperate, says Jay Fusaro, author of From the Other Side of the Desk: A Practical Guide to Shortening Your Job Search.

Your best approach, Dalton says, is to close job interviews by asking when and how you should follow up with the interviewer. Pro tip: When you check in, frame it as a service to the employer. (“Thank you again for your time last week. I just want to follow up to see if there’s any additional information I can provide for you.”)

Being willing to accept any salary

Accepting a job offer is one thing; lunging at the first opportunity that crosses your desk is another. Unfortunately, many job seekers make the mistake of not negotiating salary once they get a job offer, regardless of whether or not they’re desperate. According to a recent survey from global staffing firm Robert Half, only 39% of workers tried to negotiate a higher salary during their last job offer.

Worse yet, some job seekers make the mistake of telling a prospective employer that they’re willing to accept a job offer regardless of the compensation package—a clear sign of desperation. Resist this urge; stand tall and negotiate the offer. After all, “if you’re not willing to go to bat for yourself,” says Dalton, “a hiring manager is going to question whether you’ll go above and beyond at your job.”

Remember when we said a tiny bit of flattery goes a long way? We meant it. Hiring managers like to be complimented (let’s face it, who doesn’t?), but they can also spot when job candidates are unabashedly kissing up to them. Don’t overdo it during job interviews.

For a subtler approach, ask the interviewer, “If you had to attribute your success to one skill or trait, what would it be?” “You’re essentially asking the person why they’re good at their job, which is flattering,” Dalton says.

Talking about how badly you need a job

Put simply, don’t beg for a job. Saying that you’re in financial straits, for example, or that you can’t spend another day applying to jobs without going crazy, isn’t going to win over a hiring manager. “Even if you’re in desperate need of a job financially,” says Fusaro, “never bring up those kinds of personal issues.”

If an employer wants to hire you, it’ll be because you demonstrated that you’re the best person for the job—it’ll never be out of sympathy.

The right way to boost your odds of getting noticed

If you’re going to resort to any of the above tactics, you may as well stick a sign on your forehead that says, “Hi, I’m desperate.” Companies are interested in what you can do for them, not the other way around. To get hiring managers’ attention, you want to show off your skills and experience, and that starts with a strong resume. Could you use some help with that? Get a free resume evaluation today from the experts at Monster's Resume Writing Service. You'll get detailed feedback in two business days, including a review of your resume's appearance and content, and a prediction of a recruiter's first impression. It’s a quick and easy way to help you outshine the competition.