From female-led startups to developer training programs for women, these firms are pushing toward a more diverse workforce. 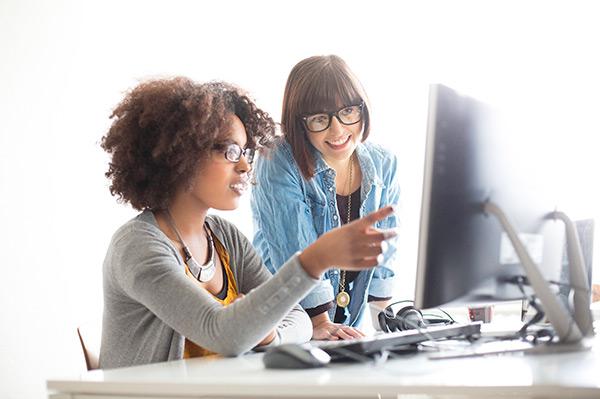 It’s no secret that technology companies have lagged when it comes to hiring women. Only 26% of the United States computing workforce was made up of women in 2014, according to a report by the National Center for Women & Information Technology. And only 6% of corporate chief information officer positions were filled by women.

Everyone wants “to work someplace where they can contribute ideas, feel comfortable doing so, and are valued for their unique, distinct viewpoints and contributions,” says ZestFinance chief people officer Sonya Merrill.

The good news is it looks like more technology companies are trying to do just that. Here’s a look at five employers (including Merrill’s) that are working to close the tech gender gap.

This Los Angeles-based financial tech company has a 90-person staff, 40% of which is female, according to Merrill. Half of its C-Suite executives are also women.

ZestFinance takes a number of steps to promote that type of culture and close the gender gap at its office. The company culture is built around 10 principles, two of which center on diversity. The company also works actively to hire people who are different from one another to create broad thinking and make sure they generate the best ideas.

“When you have widely diverse people in a workplace, they generate diverse ideas and arrive at diverse answers,” Merrill says. “Fifty percent of our C-suite is women, and we are getting close to our goal of gender parity for our entire workforce by 2016. We expect to meet the goal.”

Ada Developers Academy is an intensive software developer training school for anyone who identifies as female. The program is tuition-free and targeted at those who have a strong passion for technology but no formal programming training.

It offers a yearlong program in Seattle that includes seven months of classroom instruction in cutting-edge web technologies, in which students learn the most up-to-date development skills from regional and national experts. Students who complete the in-class work successfully receive an internship with a Puget Sound tech company to get hands-on experience working with a real engineering team.

“Being female only builds a strong common bond within each cohort and across all our cohorts at Ada,” says executive director Cynthia Tee. “This provides an interactive, deeply supportive community of help, guidance, and peer mentorship that is critical to any minority's growth and retention in the industry.”

To date, Ada has graduated 37 people from diverse backgrounds into the Seattle tech industry, according to Tee. Graduates are employed at such companies as Amazon, Expedia, Nordstrom and Zillow. The program has added more classes and hopes to graduate more than 70 women into the tech industry annually going forward.

This San Francisco-based hardware company builds a portable desktop milling machine that lets customers create two- and three-dimensional objects out of durable materials. It has a 23-person staff—52% of which is female—and its tech staff is split 50-50 between men and women.

Other Machine Co. has crafted a supportive culture, which it says has played a big part in the company closing the technology gender gap. When people start working there, they tend to quickly spread the word about how much they like it, says CEO Danielle Applestone.

“You have to make sure you have a broad, diverse candidate pool, and as long as your interview process isn’t biased, you will end up with a diverse employee base,” says Applestone.

PowerToFly is a remote recruiting startup that vets, coaches and places women in tech jobs all over the world. All jobs PowerToFly comes across are remote, so applicants have the flexibility to work from anywhere. The company provides the telework option because it understands that many women can’t just pick up and move to industry hot spots like Silicon Valley.

“The percentage of women in the workforce is going down in the U.S. because we're telling women that they need to be in the office all the time, and that's clearly not working,” says co-founder and president Katharine Zaleski “PowerToFly offers women job opportunities that work for both their lives and their careers”.

Zaleski and co-founder Milena Berry practice what they preach: They operate out of New York, but their staff works in seven different countries.

“We are giving companies access to an untapped pool of talented women in tech because of remote work,” says Zaleski. “Everybody wants female engineers; nobody has them. PowerToFly has these women because we offer them opportunities to work from home.”

Going forward however, the company hopes it will help telework become the rule, not the exception.

“We believe that the future of work for women is not in an expensive office space—it’s in the cloud,” says Zaleski. “It’s around the virtual watercooler, not in a cubicle or a tech ‘campus.’ We hope the tech industry will adapt to that quickly, so we can continue to increase the number of female engineers in tech and beyond.’

This San Francisco-based predictive sales tool company’s workforce is 40% female, and women hold 26% of its technical jobs, according to vice president of marketing Alison Murdock. Its CEO and founder is a woman.

“CEO Amanda Kahlow is committed to supporting women and using her visibility as a CEO to inspire girls and other women to dream big,” says Murdock.

6sense has taken great strides to build a culture that feels inclusive and supportive.

“Work is a place where people want to come and feel supported, because they spend a majority of their week here,” Murdock says.

When it comes to hiring, the 6sense team says it focuses on finding good cultural fits, and that it looks at all candidates as people and not as statistics. “Our employees come from different places all over the world and have varied backgrounds and experiences,” Murdock says.

“One of our new hire rituals is to have someone tell an embarrassing story,” he adds. “It’s a great ice breaker, which is why 6sensers feel comfortable and invested in building an inclusive culture.”