Author/comedian Sarah Cooper teaches you how to make it look like you own the (conference) room. 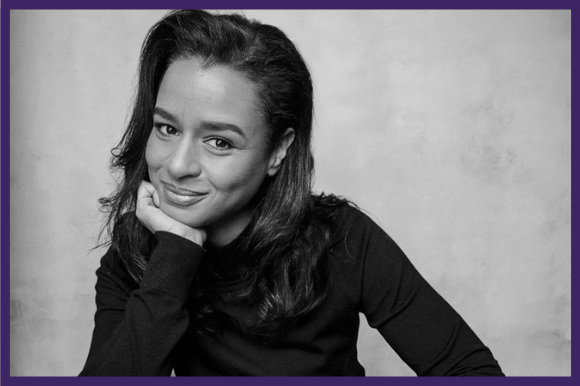 Author/comedian Sarah Cooper's books are tonic for the employee soul. See if this sounds familiar. You’re sitting around a table in an airless conference room with your co-workers while straining to understand the significance of the PowerPoint presentation glowing before you. Everyone at this meeting seems focused—or maybe they’re asleep with their eyes open. It’s hard to tell the difference, really.

The meeting leader is gesturing at a pie chart that's been mercilessly divided into a hundred tiny pie-chart slices. People start writing things down. What are they writing? It doesn’t matter. You better write something down too.

Time slogs by. At the end of the meeting, someone suggests a follow-up meeting. Someone else agrees. You nod enthusiastically—you have no idea why, but hopefully it makes you look like you know what’s going on. End scene.

If only you read Cooper’s hilarious first book, 2016's 100 Tricks to Appear Smart in Meetings: How to Get By Without Even Trying, your meeting game would have been so much tighter.

Both of Sarah Cooper's books (she also wrote 2018's How to Be Successful Without Hurting Men’s Feelings: Non-Threatening Leadership Strategies for Women) were born from the success of Cooper's website TheCooperReview.com, which is dedicated largely to the idiosyncrasies that are part and parcel of the workplace. Among the priceless intelligence-feigning hacks, there are 21 meaningless diagrams you can draw, tips to look smart in forced social situations and an illustrated guide on what to do with your face.

When 100 Tricks first came out, Monster spoke with Cooper about her meetings-rich career, how she developed her book of tricks ,and what a successful meeting looks like.

Q: What is your career background like that you’ve been afforded this knowledge on how to appear smart in meetings?

A: I have been working in the corporate world for about 15 years. I worked at a small agency to start with; I worked at Yahoo for a few years; I worked at Google for almost four years, where I was managing a design team for Google Docs, and was in five or six meetings a day. So I’ve been in a lot of meetings.

In addition to that, I have a comedy background and a writing background, and I just love observing people. Combine those things together and you get this manual for what people do in meetings to impress each other when a lot of the time they really have no idea what’s going on.

Q: Was there a particular meeting or moment in your career when you realized, “I am qualified to write this book”?

A: It took a while. I started jotting down these observations when I was at Yahoo back in 2007 and didn’t really think anything of it. I remember seeing someone say, “We have a 20% click-through rate on this button,” and someone else said, “Oh, so about one in five.” I immediately I thought, “Wow, that was really smart for that person to say that, and it took no real understanding of what was going on to make that person look like they really understood what was going on.” I thought it was a funny observation.

Many years later, I found my notebook again while I was going through things I had put into storage, and I decided to finish this list of things people do to appear smart in meetings. Q: There are so many articles, even entire books, about how we can improve the way we go about hosting or attending a meeting. What do all of these articles get wrong?

A: I think they all treat meetings like they’re this sacred, once-in-a-lifetime thing, when in reality they’re this repetitive, predictable everyday drudgery that people go through. That for me was the thing I fought against the most—the fact that nobody really felt present in meetings. Of course they didn’t! It’s just an opportunity to let your mind wander. You know exactly what’s going to happen, exactly what each person is going to say. Your brain just wants to go somewhere else.

Q: Of all the tricks in your book, which one have you personally relied on the most in your career?

A: There are so many. I’ve definitely said, “Let’s take a step back here” more times than I care to admit. There’s another trick in the book for an open-office environment, where people are always coming up to you and wanting to have impromptu meetings, and you say, “Let me just check my calendar to make sure I’m not missing anything else”—I’ve done that a million times.

Q: A large part of the humor is the bizarre vernacular we use. Why don’t we just say what we mean? What is so wrong with announcing to a roomful of people, “I don’t know the answer to your question” or “I don’t understand the words that came out of your mouth”?

A: Good question. In my experience, especially in the tech world, we did have to invent a language to speak to each other, just because it was easier. We used terrible acronyms for everything. Speaking to a researcher versus an engineer versus a product manager, we developed a shorthand.

From the outside—and especially if you’re watching yourself and the way people talk—it feels very awkward and strange, but if you’re in it and actually trying to get something done, it’s supposed to be a more helpful, faster way of talking about things.

But I will say I’ve worked with several leaders who were very adamant about getting rid of the jargon and the acronyms and speaking in very simple terms. And so I think and hope there’s a path toward speaking more plainly. That path begins when leaders start to do it and people see that it’s a better way to communicate and get ahead and get promoted. Q: It feels like no matter what meeting we’re attending—from the sneak-attack meeting to the big pitch meeting—we’re either feigning our importance or our interest or, let’s face it, our intellect. What does a successful, warranted meeting look like to you?

A: I’m going to sound very cliché here, but a successful meeting needs a clear end point—meaning, we’ll know we’re finished when we’ve accomplished this. A lot of meetings just don’t have that, or they get sidetracked.

Or we schedule a meeting with the idea of, “OK, we have one hour to decide once and for all forever what we’re going to do about ‘x.’” And, yeah, we’re not going to decide that in an hour, and even if we did, by tomorrow we will rethink it and decide something else is a better way to go—so we’ll need another meeting to follow-up on that. A good meeting needs a clear goal that we can measure, but it also has to be something that is realistically accomplishable in that amount of time.

Q: What does the future of meetings look like?

A: I worked in a co-working space for about six months, observing smaller startups and how they interacted with each other. There were lots of quick, frequent meetings, and also lots of communication and decision-making over Slack or Instant Message. The future of meetings is to be in and out as quick as possible, and if you can, just make the decision through a chat room.

The future is probably avoiding meetings at all costs—it’s a good and bad thing. Sometimes you’ll be in an email thread that’s just going on and on, and someone finally says, “You know, it might just be easier to talk face to face about this.” You might actually have to have a meeting.

If the messages in Sarah Cooper's books are ones that you yourself have been trying to articulate, know that you're not alone. Need some help getting by? Join Monster for free today. As a member, you'll get career advice, job search tips, and workplace insights that double as a survival guide. It can get pretty brutal out there. Take Monster with you.

*Images from 100 Tricks to Appear Smart in Meetings: How to Get By Without Even Trying © Sarah Cooper (Andrews McMeel Publishing).