How these higher-ups found career contentment—and how you can, too. 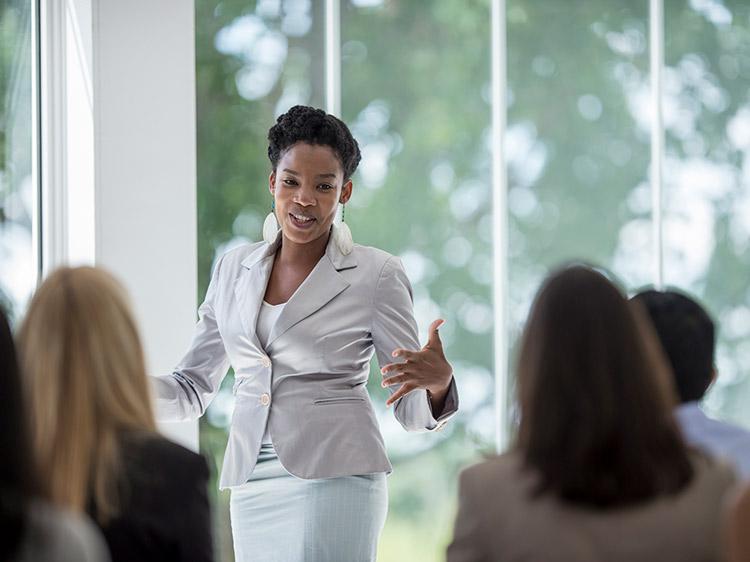 Happiness on the job—it’s a good goal, right? After all, it’s beneficial for your work life: Happy workers are more productive, according to a recent British study, which found that happy people accomplish 12% more than their less cheerful counterparts. In fact, happy employees are better workers overall, which can only lead to good things.

So how do you get happy at work? One study suggests that autonomy matters—having control of your job, including over what you’re doing and how quickly you’re doing it, boosts both work and personal satisfaction.

But that’s not the only thing that’s important. We spoke with some high-level execs to see what choices they made to become happier at work. Here’s what they had to say:

If what you really care about is love and family and giving back, working for a company that values money over family time isn’t going to make you want to get up on Mondays. “I spent the bulk of my early career on Wall Street’s trading floors, where success was defined by material wealth and possessions,” says Peter Santry, owner of The Alternative Board in Fairfield County, Connecticut.

“I decided to change careers and focus on work that served both my passion and my monetary needs,” he says.

Now he works in a business that helps others. “I was able to take what I love to do and do it in a way where I could actually help business owners become better at what they do, and lead more happy and successful lives themselves,” Santry says.

If you’re trying to do everything for everyone, you’re likely not in the best place for you. Finding a specialized area on which you can focus can make you more successful—and satisfied.

“Although there are not as many clients in that specialized area, that is when you become known for that specific niche and get recommendations and build your reputation.”

“I have had jobs before where I was very aware that I was being paid less than my team members, often male ones,” says Karla Jobling, who is now CEO of a recruiting agency in the UK.

Jobling spoke to peers and other companies within her industry to determine what she should be earning and at her next job interview, she asked for a salary above the top of that range, knowing she was shooting high, but confident she’d end up with the right amount.

"In the past, I accepted the wrong salary because I wanted the job, when I should have walked away from someone who wasn’t prepared to pay my market worth,” Jobling says. “I am confident I am being paid a fair salary for the job that I do, and knowing that makes me happier and more engaged with what I am doing.”

“Boundaries are about setting the proper distance between me, the advisor and the client, finding the proper balance between good communication, but not always being accessible 24/7. This is important during vacations and after work hours,”  says David Gratke, CEO of investment advisory firm Gratke Wealth.

“Use technology when you need to, but do not let it control your life,” warns Gratke.

“I left a position early in my career where I knew that my contributions weren’t valued,” says Steven Benson, founder and CEO of router planner company Badger Maps.

Although his previous employer recognized worker performance, Benson felt that they weren’t “capturing a lot of the value that was being created—the leaders keeping the train on the tracks, the people helping colleagues be successful, people innovating the processes—to make the whole organization work better.”

For Benson, being appreciated for what he’s achieving is a key driver of being content in his career. “It’s great to be a part of a team that is accomplishing things and to know that you’re appreciated,” he says.

At your next job interview, ask for an example of a special project that someone’s working on and how it affects the whole team. “If they don’t seem to be aware of anything, or if it’s a stretch for them to come up with a great example, there likely isn’t much recognition of individual contributions,” Benson says.

“I always felt frustrated in my corporate jobs and was always trying to bend, break or change the rules,” says Paige Arnof-Fenn, founder & CEO of strategic marketing firm Mavens & Moguls. “When I worked at startups I often had ideas that the founders chose not to pursue..”

After 9/11, Arnof-Fenn’s marketing job was eliminated, but clients were still tracking her down. “It was like a red flashing sign in front of me,” she says. So, she learned more skills in the field, upped her entrepreneurial know-how and hung her own shingle, founding marketing consulting firm Mavens & Moguls.

“Now the buck stops with me,” Arnof-Fenn says. “When you believe in your core that a bad day on your own is better than a good day at your desk job, you’ve got nothing to lose.”

Ask yourself, “Does this make me happy?”

“It’s a self-assessment,” says Pamela Shand, who is CEO of career coaching firm Offer Stage Consulting. “If you want to have career contentment, you have to be okay with asking yourself this question from time to time. If the response is always ‘Yes,’ great. If it becomes ‘No,’ be okay with where that leads you.”