You may have chosen the perfect words for the meeting, the presentation, or the one-on-one conversation, but if your body language isn’t in sync, your message won’t stick. 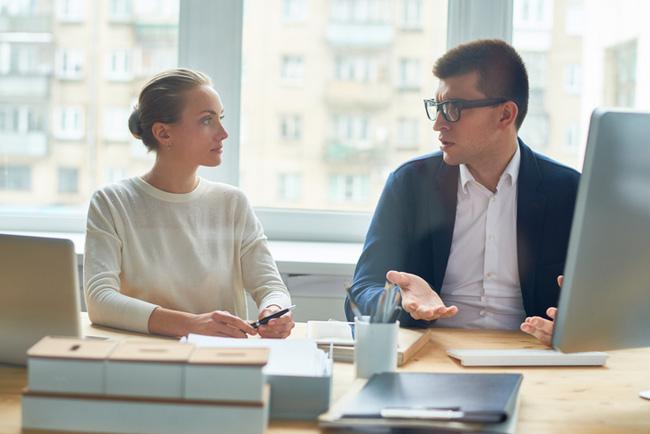 Even subtly, your body language at work says a lot more than you might realize.

You’ve mastered the firm handshake—congrats! But don’t stop there: Body language in the workplace goes way beyond that. Think about it: You can only get out so many words per minute (yes, even you fast talkers out there), but your body gives off thousands of messages in that same stretch of time, says Patti Wood, an Atlanta-based body language expert and author of Snap: Making the Most of First Impressions, Body Language, and Charisma.

Read through these six common mistakes to see if your body language is working against you.

Mistake #1: You’re making too much (or too little) eye contact

Without eye contact, you’re telling the person who’s talking that what they’re saying is not important, says Karla Beltchenko, founder of The Narrative Body in Chicago.

“Immediately, that person may recoil back, and anything they may have wanted to say to you, they probably won’t say it anymore,” she says.

Be warned, though: More eye contact isn’t always better. An intense stare down can be downright intimidating. “It can be used as a power thing,” says Wood.

For optimal engaged-but-not-creepy results, Wood says to make eye contact 60% to 70% of the time, then look away.

Mistake #2: You use too many hand gestures

Some people are hand talkers—it’s natural. And, hey, it’s better than lazily letting your arms hang by your sides, which makes you come across as lethargic, Goman says.

But going overboard with lots of flailing arm movements can be distracting and can make you seem erratic.

So, what should you do with your hands? Keep your gestures between your shoulders and your hips. “That’s the power plane, or where you look the most powerful and also authentic,” Goman says.

Mistake #3: Your verbal and nonverbal messages don’t match up

Goman recalls watching a senior vice president speak at a meeting. He kept the audience captivated for 20 minutes and ended his speech by saying he was open for questions. “But when he said ‘open,’ he crossed his arms,” Goman says.

Cue the confusion. The audience took his crossed arms to mean he was closed off and not approachable. “No one in that audience had a question for a man they absolutely adored for 20 minutes,” Goman says.

People tend to trust the nonverbal message over the verbal one when they don’t agree, Wood says. So if you want to appear friendly and receptive during a presentation, uncross your arms. Oh, and lose the podium, too, Goman suggests.

Close talkers—as in people who speak inches away from your face (you know the type)—tend to be taking advantage of their power, Goman says. Whoever’s on the receiving end will likely feel uncomfortable. “No one likes someone invading their space unless they’re invited in,” Goman says.

At work, try to leave at least an arm’s distance between you and whomever you’re talking to, Beltchenko says. But you also don’t want to be so far away that you seem unapproachable.

Rather than sitting behind your desk the next time you call someone in for a meeting, sit side by side, with your body pointed diagonally toward him or her. “A lot more work gets done that way versus if they feel intimidated by you,” Beltchenko says.

Mistake #5: Your shoulders and toes face the door

Want to see where a person’s true interest lies? Look at their shoulders or their feet. “One of the first indicators that someone is trying to leave a conversation—and this happens a lot when networking—is when they turn a shoulder or a toe away,” Beltchenko says.

To show you’re engaged, keep your body directed at the person in front of you.

Mistake #6: You hide behind technology

When an employee steps into your office, do you keep one eye on your inbox? When you arrive to a meeting a few minutes early, do you bury your head in your phone? Yesses to either question tells others you’re too busy and don’t have time for them.

“Instead of instantly saying, ‘You’re so important to me, I’m going to put this away,’ if there’s even a 30-second wait time, you’re sending the message that [whatever’s on your phone or computer is] more important than your employee,” Wood says.

Closing your laptop when a colleague steps in or engaging in a little pre-meeting small talk, on the other hand, can help build rapport.

Plus, Wood says you’ll likely save time since people tend ramble when they think the person they’re talking to is only half listening.

Ready to put your moves to work? Try them at your next interview

It’s one thing to master the right body language moves at your current job, but the real test comes when you’re looking for your next gig—and the worst thing you could do is send a message that you lack confidence while trying to sell yourself and your stellar performance record. Join Monster to start receiving weekly job alerts by email so you can scope out new opportunities, as well as get our expert tips on networking, negotiating, and career advancement.