You do not want to be the person who becomes part of company lore. 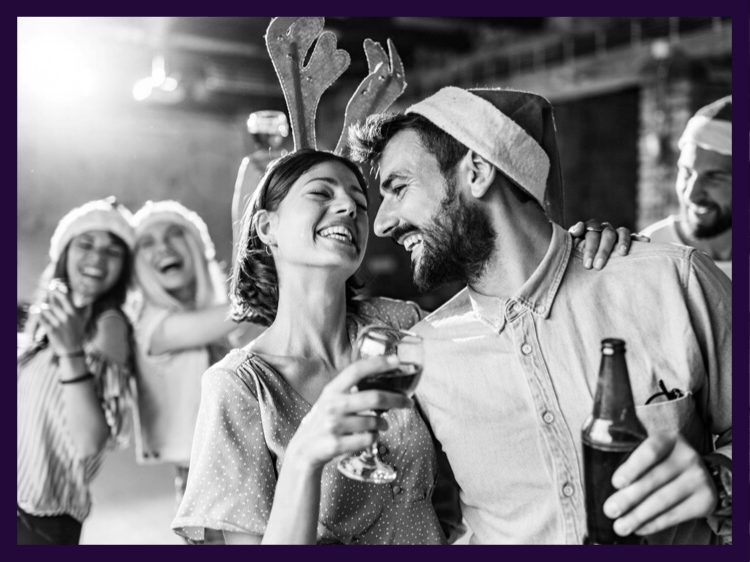 Spread the cheer, not the gossip.

Once upon a time in a rented hotel ballroom far, far away, the perfect office holiday party was thrown. Different department teams mingled merrily, and even the introverts felt perfectly at ease. Nobody got wasted, and everyone got along perfectly.

But since you don’t work at Imaginary Office, Inc., you have to deal with a real-life holiday party—even if you might dread it. In fact, a recent Monster poll revealed that 60% of you aren't looking forward to it all. Vicki Salemi, Monster career expert, says that unless you loathe your job, it's toxic, and you don't want to spend even one minute beyond the normal work day with colleagues, you get a pass to not attend. "Not attending is sometimes better than attending if you're going to look and feel miserable the entire time. Unless it's this extreme though, you should try to grin and bear the party even for a little while," says Salemi.

Here are some tips on how to get through the most wonderful time of the year without turning into a Grinch.

"If your office is having a formal event, dress up,” says Robin Schooling, managing partner, human resources and people, Peridus Group. “If it's a casual potluck in the break room, dress how you would for work. If the theme is ugly sweaters, find the ugliest work-appropriate sweater you can, and wear it with pride."

When deciding what to wear to a holiday party, the important thing is to gauge what your office is doing and follow suit. Don't be the person wearing a cocktail dress or ascot to the lunch hour Secret Santa gift swap. You will never live that down.

Don't be a grinch

In every office, there are some who will approach an office holiday party like they’re too cool for school. They skip it, or worse, they attend and then complain about how they spend enough time with their co-workers already. Nobody likes a party pooper.

Yes, you need to attend the office holiday party—it’s a work event, says Richie Frieman, manners and etiquette coach and author of REPLY ALL...and Other Ways to Tank Your Career: A Guide to Workplace Etiquette in Owings Mills, Maryland.

Network with someone new

Take some time to network at your office holiday party. Hop outside of your silo and hang out with a different department. By making an effort to speak to someone outside your circle, you can grow your sphere of influence, says Colin Exelby, president of Celestial Wealth Management in Towson, Maryland. “You’ll expand your network and appear as a team player,” he says. “You never know how that individual might be able to help you in the future.”

Arrive on time but don't stay too late

If you're fretting over when you should arrive at the holiday party, a good rule of thumb is to limit your appearance (and exit) to within the official times for the party. This will help you avoid all kinds of potential awkwardness.

Be respectful of everyone’s time—the organizers don’t want people there while they’re setting up or tearing down. Salemi's pro tip is to get there early, actually right when it starts. She advises that, "the C-Suite executives usually show up early, too. Put in face time, work the room, and get the food while it's hot!"

Remember that it doesn't need to be an all night affair, so don't feel as if you have to stay the entire night. Make the most of your time there, and as Salemi suggests, turn it into a game with a checklist in your head: talk to boss, check. Talk to boss's boss. Check. Mingle with co-workers. Eat free dinner. Done! Smile and try to enjoy it. "You can get a lot accomplished in less than two hours. And if you do end up staying longer, remember you can leave at any time. The important thing is that you showed up for yourself," Salemi says.

Talk about something besides work

Your co-workers are more than just humans that you work with; they’re also humans that have families, hobbies, and causes they care about—just like you do. It’s hard to have a good time when you’re discussing the finer points of your job responsibilities, so avoid work topics as conversation starters. “Instead, connect with co-workers as people,” Friedman says. “That goes very far in business, and management can see you have a social side to you.”

As important as it is to relax, have a good time, and share the more social side of yourself at the holiday party, you’re still in a professional environment, so keep your decorum intact. Translation: Know your drink limit, and stick to it like glue. "Don't turn yourself into water cooler fodder for the next day," Schooling says. The good news is that majority of you know this already—54% of poll respondents said that between one and two drinks is appropriate, and another 29% didn't think drinking at work functions was appropriate at all. Follow your gut and watch how much you imbibe.

Nobody wants to be the butt of a joke, but when it comes down to it, somebody will inevitably do or say something embarrassing. In the day and age of social media, what goes on at the party, does not necessarily stay at the party. For this reason alone, conduct yourself in such a way you'll be proud to see yourself tagged in videos and photos, not embarrassed. It may only be one night at a holiday party, but the internet lives forever.

Before you leave your holiday office party, be sure to show gratitude for your employer’s generosity. Planning a party, regardless of size, is no easy feat. Find your boss and the party organizers, and thank them for the festivities. This tiny gesture can go a long way in helping you stand out from the crowd.

Although 85 percent of poll respondents said they have never had so much to drink that they regretted saying or doing something at a holiday party, there are 14% of you have let the holiday spirit get the best of you. In that case, hold your head high when you return to work and always remember you can post up to five versions of your resume on Monster in case you need to find a quick exit. Join Monster for free today. As a member, you'll learn workplace know-how and etiquette, as well as get useful job search tips sent directly to your inbox. We can't promise that you won't spill coffee on the boss or insist on singing "Take This Job and Shove It" on corporate karaoke night, but we can do our very best to give you a heads up on how to be an employee people actually want to hang around.