Dream job: How I became an athletic trainer

Taking care of these Tigers keeps Shelly Mullenix on her toes. 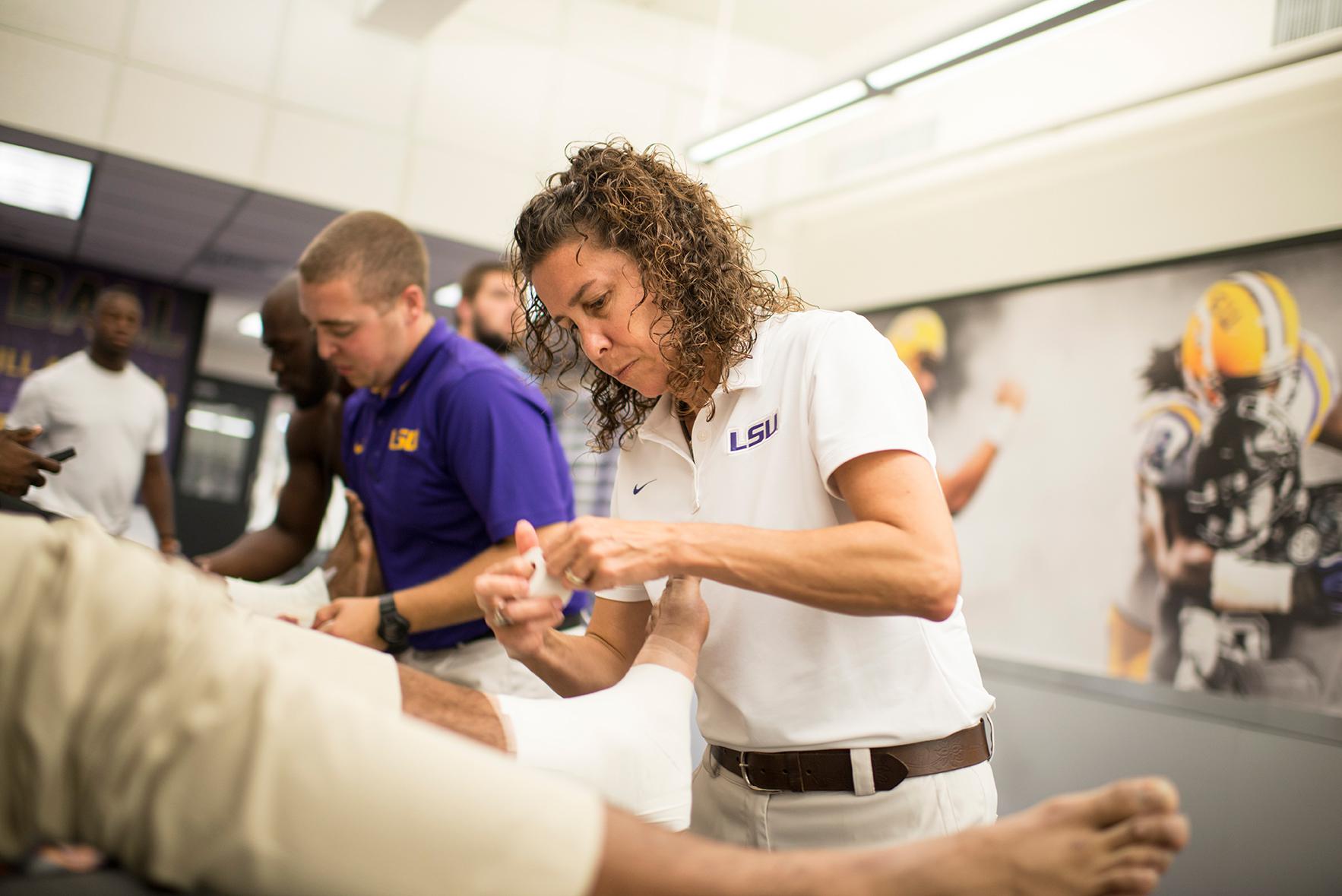 Shelly Mullenix describes herself as a “helper.” And her job as an athletic trainer requires helping some of the toughest people around—Division I college football players.

As the senior associate athletic trainer for the Louisiana State University football team, Mullenix, 46, plays a daily role in supporting the health needs of the players, a regimen that includes exercise prescription, nutrition, and injury treatment and prevention. She also serves as director of wellness for the athletic program.

She prides herself on taking care of her student-athletes during such an intense, volatile time of their lives. She’s also proud when they come back to see her years after graduation. “Pain is inflicted in this building through workouts and injuries,” Mullenix says. “But they still have good memories.”

Jobs like hers are growing much faster than the average for all occupations in the U.S.—21% for athletic trainers compared to 11% for all U.S. occupations—and typically pay anywhere from $30,000 to more than $55,000, according to PayScale.

How she got into the field

Mullenix showed interest in the profession from a young age. Growing up in North Miami Beach Florida, she worked in a sporting goods store and she even served as a student athletic trainer at her school. “I always had an interest in being outside, not being stuck at a desk,” she says.

There’s little “typical” about an athletic trainer’s day. Not only does this position have irregular hours, some could say Mullenix works around the clock.

It may start with an early check on any athletes who are sick or injured, then relaying their statuses to the coaching staff so they can coordinate their plans for the day. Perhaps a player pulled a muscle at practice. Does he need another day to recover?

Since she works with student athletes, she might also meet with people from the academic side of the university, particularly if a student is at risk of losing eligibility.

"Overall, it’s a very collaborative environment, one that encompasses life on and off the field for the student-athletes she works closely with," Mullenix says. "It’s not just about the body. It’s about mind and spirit, too. I can address the whole kid, not just his injury.”

What skills she says are important

Nearly all states require athletic trainers to have a license or certification, with requirements varying by state. You’ll need at least a bachelor’s degree to enter the profession, but master’s degrees are becoming increasingly common.

You’ll also need to be pretty fit yourself. This is a physically demanding job, and stamina is a must. “You’re out there supporting 300-pound bodies, and the heat in south Louisiana is obviously pretty extreme,” Mullenix says.

And no matter how much you’re sweating, you need to be able to keep a cool head. Her job requires her to make quick decisions to protect the well-being of her athletes, often in high-stress situations. Putting them back on the field before they are fully recovered could permanently damage their health and athletic careers, for example. And all this can happen with millions of people watching. “It takes a backbone,” she says.

What she says is the biggest challenge

The toughest thing about the job is how all-encompassing it can be. Mullenix's role is not always confined to traditional business hours—or even the duties you might assume are part of being an athletic trainer. Her job includes concerns over grades, relationship conflicts or other personal issues. “If kids are struggling at night, they may call us," she says. "Because they trust us."

During high-profile games, things can get especially intense. But you have to strike a balance when it comes to taking care of yourself, your family and others, she adds.

“If I don’t have a way to actively release the stress, it would build to the point where I would not be able to help other people," she says.

This isn’t just a matter of being selfish. “There’s no sense in being frayed and crazy and trying to help other people.”

Know that it takes more than a love of sports to make a great athletic trainer.

You just have to love this work in particular—and there’s a lot to love, Mullenix says. “To know that you can positively impact the student athlete’s life by returning them to full health, strength and elite athletic ability is both rewarding and meaningful.”