When a rivalry goes too far, what do you do? Experts weigh in on how to gracefully bow out of a workplace competition. 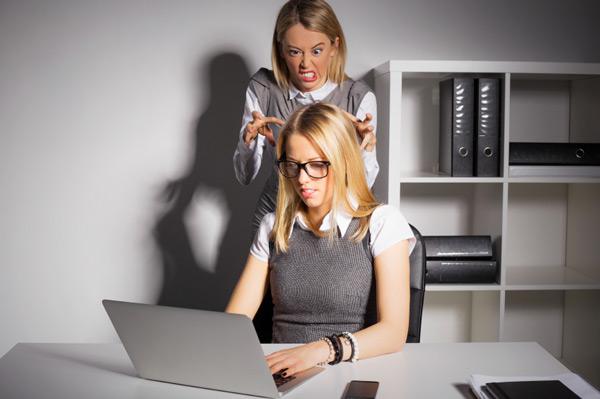 There’s nothing like the thrill of competing with your work nemesis to bring out your best performance. Just think of some of your favorite rivalries: Peyton Manning and Tom Brady, Katy Perry and Taylor Swift, Luke Skywalker and Darth Vader. Without someone to chase and outperform, would you be as motivated? A little friendly competition never hurt anyone, right?

Wrong. An international poll conducted by Monster found that nearly 50% of respondents have either left a job because of a workplace rivalry or considered leaving. These respondents reported reduced job performance, undue stress, getting into trouble with management and even job loss as a direct result of workplace rivalries.

The reality is you may eventually find yourself in a similar predicament where healthy competition takes a turn for the worst. The good news: Career experts say there are steps you can take to tone down your workplace rivalry… before it’s too late.

Be direct with your rival

If you feel like your co-worker is taking the competition to extremes, it’s time to intervene. Experts say it’s important to communicate directly with the person, but to do so in a private conversation.

The last thing you want is a public, heated argument, so ask the person to grab coffee to talk, says Karen Dillon, Harvard Business Review contributing editor and author of the HBR Guide to Office Politics.

When you have the conversation, it’s important to be direct and stick to the facts. Why? Dillon says many people are unaware they’re doing something that’s distressing others, until someone points it out. And once you point it out, they might try to correct you.

Dillon suggests giving specific examples, such as, “I noticed you turned in that report without my name on it. We worked on it together, so I wanted to know why you did that.” Or there’s: “In the meeting, you kept using the word ‘I’ to discuss the ideas we came up with as a group. I’m not sure if you are aware you were doing that, but it didn’t feel fair to me.”

Vanessa Gray, spokeswoman for the Society for Human Resource Management, suggests explaining why your colleague’s behavior bothers you. If you’re an active listener and hear them out, you might be able to find a solution.

Shift the focus to you

Healthy competition takes a wrong turn when you and your co-workers start focusing on hindering each other, rather than focusing on bringing out the best in yourselves.

After you’ve confronted your co-worker, try to “keep a safe distance to avoid getting sucked into the toxicity," workplace expert Donna Flagg told Monster. “It's contagious.”

A great way to tone down an unhealthy rivalry is to shift the focus on competing with yourself. Instead of trying to undermine your co-worker, focus on how to perform in a way that helps move the company forward. Ultimately, that’s a better strategy for boosting your career.

Ask your manager for guidance

When it comes to workplace rivalries, managers don’t want to get involved and value people who can problem-solve on their own—that should always be your first move. But, if dealing directly with the person isn’t working and you’ve tried to avoid them and focus on your tasks, experts say you shouldn’t be afraid to report the situation to your supervisor—just approach it as means for guidance, rather than a chance to tattle.

“If you’re speaking to your manager, be prepared with specific instances where you felt you were wrongly hindered by your competitive colleague,” says Dillon.

When speaking with your manager, focus on how this distraction is getting in the way of you doing your work, rather than how you feel you’re being treated unfairly. Once your boss is aware of the problem, he or she can help mitigate the issue and watch things more closely.

If at this point the issue isn’t resolved and your colleague is seriously hindering your productivity—and happiness—it may be time to make your exit and freshen up that resume.