Common workplace conflicts and how to handle them gracefully

The office isn’t the place to lose your cool...no matter how warranted or frustrating. There’s a right way—and a wrong way—to handle work drama. 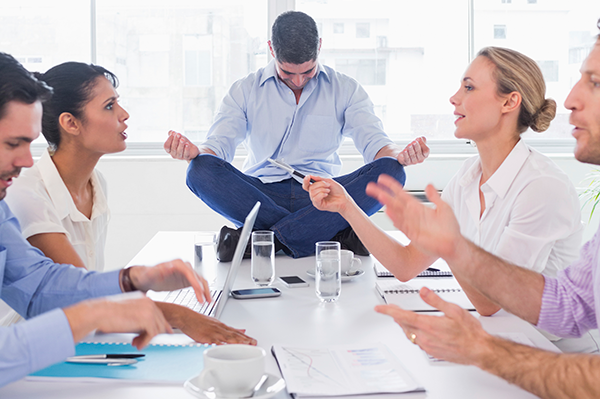 Conflict in the workplace is as common as paper jams and subpar coffee. We all get irritated from time to time. Someone says something we don’t agree with. Someone doesn’t give you the credit you deserve. Someone laughs when you said something serious.

But unlike our sixth-grade selves, we can’t talk back to other people—especially at work, though conflicts are bound to happen in the office. Professionalism—close cousins with maturity—is the word adults use.

This is how to gracefully handle conflict in the workplace while maintaining your sanity.

How to handle a disagreement with a co-worker

You won’t always agree with your teammates over strategy on projects, and therein lies the challenge—recognizing their ideas, voicing yours, and being OK with and supporting what transpires. You also might not agree with those outside your department, either, especially if they’re on a similar height on the totem pole.

Writer and former editor-in-chief of Cosmopolitan Kate White is familiar with conflict in the workplace. When employees lack seniority over the other, power struggles sometimes occur. “I think it is essential in those situations to find common ground. Talk about what aspects you do agree on,” she says. “Then figure out if there's one choice that appeals to both of you.”

Even if it’s neither employee’s first choice, it might be worth it to salvage the working relationship—it might also be worth approaching a higher up.

“When you approach the higher up, don't throw your colleague under the bus,” White says. “Simply say something like, ‘Bob and I would love your input on making this decision.’”

How to handle competitive or lazy co-workers

Kathi Elster, an executive coach and the co-author of Mean Girls at Work, Working with You Is Killing Me, and Working for You Isn’t Working for Me, says competition at work is normal and that you should look for opportunities to learn from competitive co-workers.

On the other hand, working with a lazy co-worker is a bit more difficult. “The graceful way of dealing with this is to not overcompensate for the lazy co-worker,” Elster says. “In others words do not do their job or let it be seen that he/she did not do their work,” she says. “If you do choose to do the other person’s work, no one else will know, and you will grow resentful.”

Although it may be beneficial to bring in a manager, this should be the last resort, says Vanessa Abron, an independent public relations consultant. “Managers don't like to get involved in workplace drama unless absolutely necessary, so only resort to this if talking to your colleague on your own isn't bringing fruitful results.”

Abron advocates getting lunch with the person you’re having a conflict with, conversing candidly and sincerely about what the issue might be, and letting your colleague know that you want to have a great working relationship with him/her and that you want to know what you can do so that the two of you are on one accord.

“Maybe you unintentionally did something to that colleague that offended them that you aren't aware of,” she says. “This provides a platform so that the two of you can work through whatever the issue is outside of the workplace.”

People are difficult, and unless you work in a bubble, you're going to encounter them at work. (Fact: Nobody works in a bubble.) Building up your people skills is every bit as important as your hard skills. Could you use some help in that department? Join Monster for free today. As a member, you'll get career advice, workplace know-how, and job search tips sent right to your inbox. And when the time comes, we'll also help you find a new job—one with fewer conflicts and more awesome people.