Kate Kemp, a creative director from New York, tells the story of the day she walked into her agency’s HR office knowing she’d walk out for the last time. This is the first in a 13 part series. 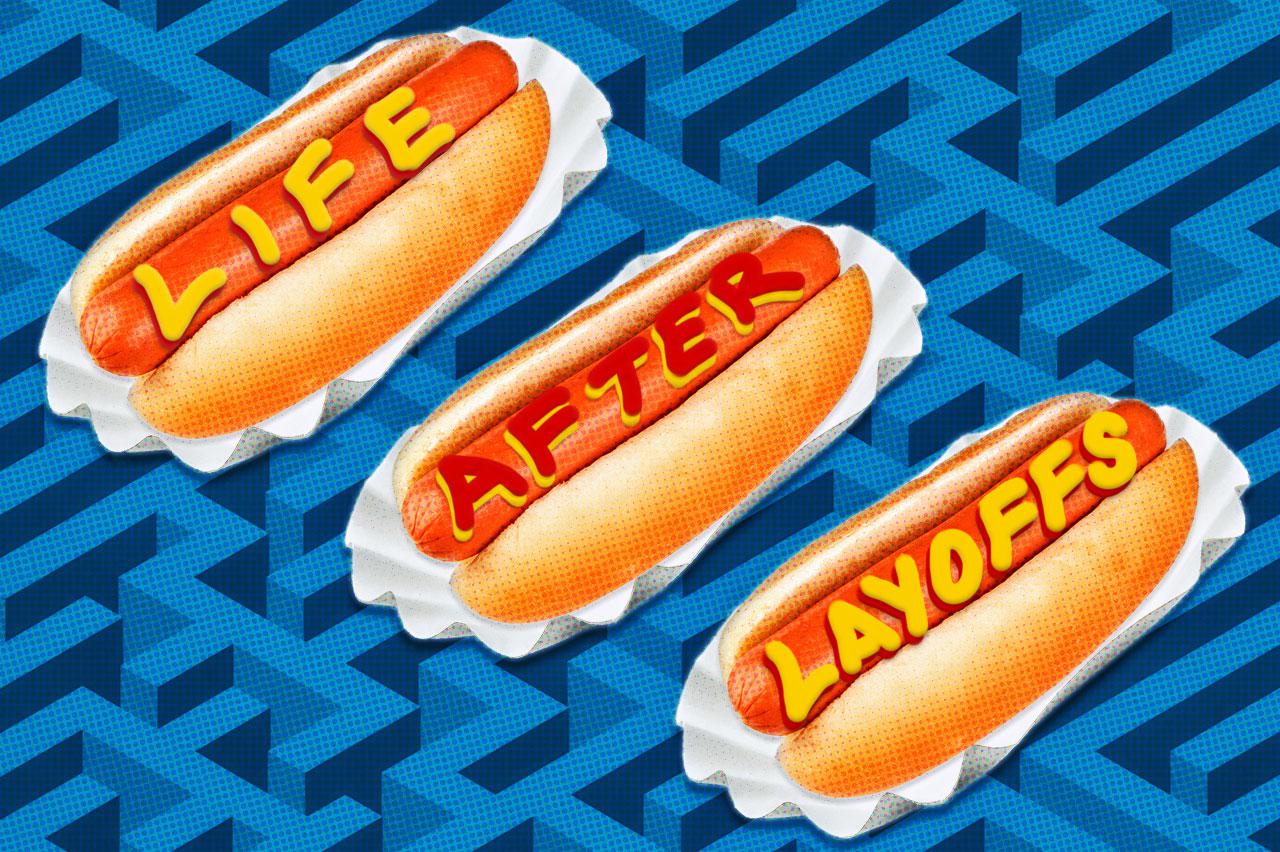 In January, Kate Kemp lost her job as a creative director in New York due to a corporate restructuring. Monster asked her to chronicle her life after a layoff (we’ve all been there, right?). This is the first in a weekly series that will chronicle how she went from crying into a hot dog in Times Square to moving cross-country for a new employment adventure.

As my boss came through the security gates to meet me in the lobby, I knew the news wasn’t going to be good.

His eyes were sad and they weren’t meeting mine—a rarity for someone who was always open, honest and straightforward with me. I greeted him with our standard hug and, with my chin on his shoulder, asked something I already knew the answer to: “Am I getting let go?” He morosely replied, "You know I can't answer that question."

Although I’d predicted this moment given a recent client reorganization, I thought I’d have more time to figure out my next move. Walking slowly through a maze of hallways I never realized were part of our agency’s floor plan, I gave myself a silent pep talk consisting of two words on repeat: “Don’t cry. Don’t cry. Don’t cry …”

My boss opened a door with a crooked foamcore sign that read “Session in Progress” to reveal a tiny table surrounded by three chairs. The head of HR sat in one of them holding a shiny maroon folder I knew held my dismissal paperwork. Trying to lighten the mood as I sat my bag down and removed multiple layers of winter gear, I joked, "Welp. I know what THIS means," let out a forced laugh, and prepared for the inevitable.

EVERYTHING IS GOING TO BE OK, RIGHT?

With over 15 years’ experience in the creative/agency world, I’d seen my share of layoffs. Most resulted in a heaping helping of survivors’ guilt and a doubled work load, but, on two occasions, I’d been the not-so-proud owner of a severance agreement.

(My first layoff came as a total shock. I was young, naïve and believed I was invincible until an early morning phone call revealed two things: 1) There were notes on 95% of the creative teams’ desks letting us know we’d been cut. 2) Everyone planned to go drink as soon we’d wrapped our HR meetings. )

Over time I learned that no one is impervious to layoffs. I’ve watched in shock as brilliant colleagues were removed from our email and phone lists at more than one agency. And I’ve rolled my eyes in far too many rah-rah meetings in which my skeleton crew gets a motivational message about how everything’s going to be OK.

The thing is … everything is going to be OK.

Over time I learned that no one is impervious to layoffs.

It certainly doesn’t feel that way when you’re listening to your boss tell you today is your last day. Or when you look at that pile of contractual paperwork you’re supposed to sign. Or when you realize you’re not in the middle of a bad dream. But somehow, magically, both of my previous layoffs resulted in something 10 times better.

As I sat in that claustrophobic room half-listening to the HR rep give the “it’s not you, it’s us” breakup speech, I tried to convince myself that this layoff would be no different. But it wasn’t easy. It doesn’t matter whether you loved or hated your position. It doesn’t matter if you were planning on staying forever or leaving that same day (in fact, I’d taken a taxi from an interview to this particular meeting). It doesn’t matter whose fault it is or whose decision it was. The emotions you feel after being cut by a company are just as painful as those you feel after being dumped by a romantic partner. And, like any good breakup, it’s important to allow yourself to feel them.

“EVERY PING MADE THE STING HURT A LITTLE LESS”

After the awkward chat and a solid goodbye hug, I left the office and started walking. I wasn’t really sure where I was going. I just knew I needed to keep moving. Shivering under my thick scarf and carrying a bag that was one laptop, one building pass and one corporate credit card lighter than it had been an hour earlier, I wandered into Times Square. In a numbed state of hunger and exhaustion, I grabbed a hot dog, sat on an icy metal bench and, angrily wiping tears away between bites, tried to figure out how the hell I was going to pay next month’s rent.

Eventually, I called my boyfriend and told him what had happened. Thankfully, I have an incredibly supportive partner and a network of amazing friends who said all the right things. And, once my departure was officially announced, I received a barrage of “WTF”/“What can I do to help?!” text messages, emails and phone calls from my shocked and concerned work family. Every ping made the sting hurt a little less.

I wasn’t really sure where I was going. I just knew I needed to keep moving.

When it came to former colleagues reaching out, what helped the most were the recommendations they passed along to potential new employers. Let me tell you that if you’re ever in the situation where your coworker has been let go, one of the most mood-altering things you can do for that person is to let the world know how awesome you think they are in the form of a recommendation or an introduction. (Bonus: The more people you help through rough times, the more people you’ll have to turn to when you’re dealing with your own.)

As I sat, staring blankly at the phone, I told myself, “Remember: it’s OK to feel awful.”

Here’s my advice if this happens to you: Take a couple of days to mourn over huge spoonfuls of ridiculous ice cream blends in bed and be depressed—or even have an angry cry in Times Square amid a sea of selfie sticks and fuzzy Disney characters. No one will notice. I promise. There’s no expectation that you need to jump up all bright eyed and bushy tailed ready to tackle the world the very next day. You’re allowed to be upset.

Just don’t hide under the covers for too long. You’re not unemployed. You already have a new, full time gig: finding a new job.

Kate Kemp is currently the Group Creative Director at HackerAgency in Seattle.