Butting heads with your boss? Adapting to your manager’s style and personality can be tough, says ‘Managing Up’ author Mary Abbajay. Here’s how to know whether you should buddy up or break up. 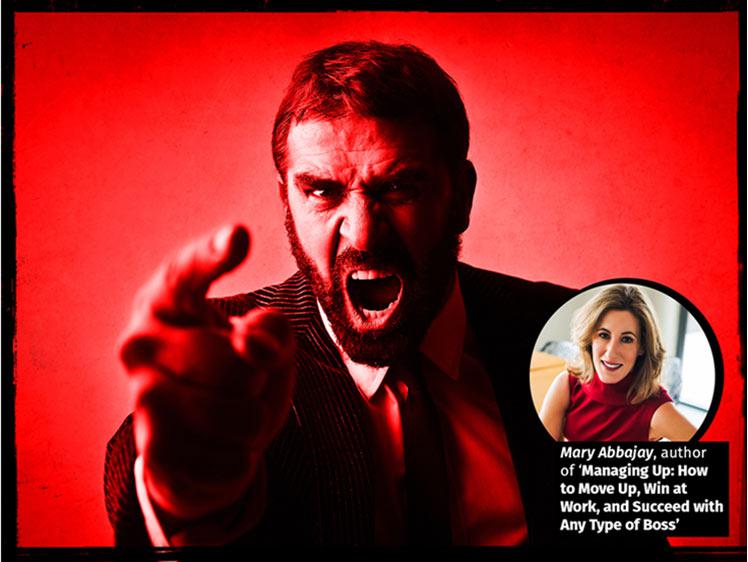 Learn how to get along with your boss.

What are three words you would use to describe your boss? “Rage-prone,” “two-faced,” “micromanager”—that’s how Mary Abbajay describes an old boss she worked for years ago in her late 20s. Sound familiar? More like absolutely freaking awful. Her book Managing Up: How to Move Up, Win at Work, and Succeed with Any Type of Boss teaches you how to deal with a difficult boss.

There was a silver lining in that thundercloud for Abbajay. “He inspired me to quit and start my own business—and to never treat people the way he did,” Abbajay writes in

Now her own boss as co-founder and president of coaching and leadership development firm Careerstone Group, based in Washington, D.C., Abbajay has spent the past couple of decades fielding questions and complaints about “bosses from hell.” Her book covers more than a dozen specific types of toxic bosses, including workaholics, narcissists, micromanagers, and “ghost bosses” who are just never around.

“Although you rarely hear anyone say so, being a good follower is essential to success,” Abbajay says. “Part of that is learning how to reach your own goals while working effectively with a higher-up who can be annoying, indecisive, or abrasive.”

That said, not all leaders are worth following. “If your manager is so bad that your self-worth is crumbling, if you’re overwhelmed, or even afraid, or if you find yourself crying in the parking lot,” she adds, “your only option is to get away from that person pronto.”

Wondering how bad your boss actually is? Abbajay developed a 20-question quiz designed to help you determine if it’s time to bail. If, for instance, your boss enjoys tearing you down in front of other people, regularly flies into screaming temper tantrums, or “demands absolute loyalty but will throw you under the bus at the first opportunity,” your course is clear: “Get out. Now,” Abbajay writes.

Most bosses, of course, aren’t sociopaths (or, are they?)—they’re just ordinary, flawed humans. Monster recently spoke with Abbajay about how to deal with a difficult boss.

Q. Why do so many employees have a hard time getting along with their boss?

A. In most organizations, people get promoted on the basis of their technical skills, not their management skills, so there are lots of mediocre managers around. But that just makes it more essential to stop complaining and start figuring out how to make the best of a less-than-ideal situation. Millennials, especially, haven’t gotten this message.

One thing that often gets in the way is our own ego, meaning our need to be right. It’s easy to waste time and energy thinking about how our boss “should” behave, while resisting changing anything we might be doing, or not doing, that’s contributing to the problem. We can’t really change other people, but we can change how we interact with them.

Q. What’s the most common type of difficult boss?

A. The complaint I hear most often is about micromanagers. Their need to control every little thing clashes with the basic human need for autonomy.

Managers who are impulsive or inconsistent, constantly changing direction, make us uncomfortable, too, because we all crave some level of certainty. But there are strategies for responding to each kind of maddening boss, while keeping your own sanity.

Q. You write about the importance of knowing whether your manager is an introvert or an extrovert. Why does it matter, and how can you tell?

A. It matters because it has a huge effect on how you and your boss interact. Introverts spend more time alone and talk less, while extroverts are just the opposite. They walk around and socialize a lot, and they’re usually the ones who dominate meetings. For instance, extroverts tend to think out loud. So, if you work for one, recap each conversation at the end, either in person or in an email. You want to make sure you’re hearing the real point, not just the thinking-out-loud part.

I’m an introvert, so a co-worker who pops into my office 10 times a day for a chat will drive me insane. If you’re the one who’s introverted, your more extroverted boss may feel that getting information from you is like pulling teeth. Conversely, let’s say you’re the extrovert. Maybe your introverted boss feels like you never shut up.

The point is, are you draining your boss, or are you energizing her? Being flexible enough to adapt a little can go a long way toward improving the relationship.

Q. Let’s say you’re job hunting to escape what the book identifies as a “truly terrible boss.” What should you say in interviews?

A. Of course, most people know that you should never, ever criticize a former boss in a job interview, for any reason. But many businesses are very small worlds, where everyone above a certain level knows everyone else. You may run into an interviewer who has worked with, or for, your nightmare boss at some point in the past.

So you might hear a comment like, “Gee, you work for So-and-So? I’ll bet that’s no day at the beach.” Resist the temptation to vent! Instead, say something positive like, “It can be challenging at times, but I’ve learned a lot, and I’ve been able to do some great work for him…”—which you then go on to describe. The interviewer is likely to be impressed by both your resilience and your tact.

Q. When starting a job, what can you do to get your relationship with your new boss off on the right foot?

A. When starting a new job, the single most important thing is to have a conversation where you ask three questions. What are your new boss’s priorities? That is, what is he or she mainly trying to accomplish? Then, what are his or her preferences about how, and how often, you report to to them—weekly in person, daily by email, or what? Third, what are his or her pet peeves? What specifically do they not want from you? Knowing the answers to these questions, instead of making assumptions or trying to guess, can make all the difference right from day one.

Ready to break up with your bad boss? Do this now

Learning how to deal with a difficult boss is exhausting. Have you reached your tipping point? There’s a quick way to start the break-up process. Join Monster for free today. As a member, you not only get job alerts emailed right to your inbox, which cuts down on the amount of time you’d spend combing through ads, but you can upload up to five versions of your resume—each tailored to different types of jobs that interest you. Recruiters search Monster every day looking to fill top jobs with qualified candidates, just like you. Leave your bad boss behind, and move forward with your career.