Presentations don't have to be torture. With some simple tricks and practice, you'll gain confidence at the podium. 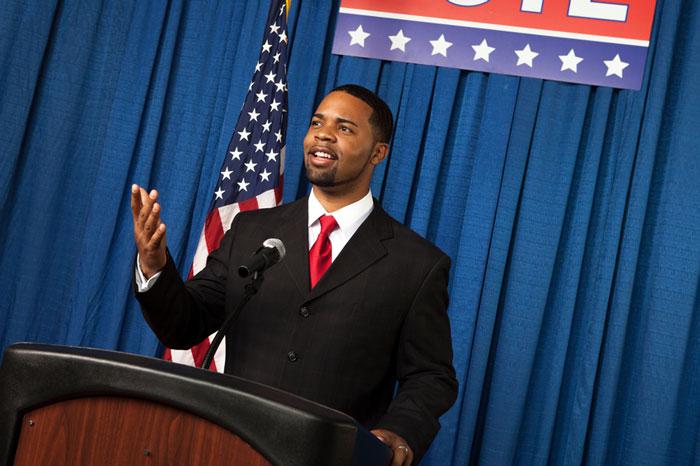 Many people clam up when it's their turn to make a presentation, regardless of how many people are in the room. But there are ways to overcome the fear of public speaking.

"Understand that the audience really wants you to do well," says Patricia Fripp, a San Francisco-based professional speaker and speech coach. She offers these tips to help you organize your next talk.

"The best way to be a good and confident speaker is to practice," says Fripp. The least costly way to go about it is to join a Toastmasters Club. This is a national organization devoted to making speeches. Toastmasters Clubs are relatively cheap. They require a $20 new member fee, along with dues of $27 payable every six months.

"It's natural to be nervous, but don't talk about it," advises Fripp. "It shifts the focus away from what you are saying." Make sure you breathe properly, because most people stop breathing when they become nervous.

Filler sounds merely irritate audience members. "The only way to clean up your speech habit is to record yourself and listen to the recording," Fripp says. "That way, you are aware of the problems you have, and you can correct them."

Silence is your friend

Silence is the antidote to the "you know" and "uh" stalling tactics. "Don't be afraid of a moment or two of silence—it's one way to let the audience absorb what you've said," Fripp says.

While preparing your talk, remember that structure, content and delivery all count. "Unless you know what you are going to say and have things well-organized, it'll be very difficult to create that magic and emotional connection you need to have with the audience," warns Fripp.

Don't write out your entire speech

Get to know people

If you're talking to people at your company, the more of those people you actually have had contact with, the better you'll deliver the speech. Schmooze with audience members before a meeting. Why? It brings on the friendship factor. The more people like you, the more slack they'll cut you if you goof up your talk.

Look them in the eye

It's important to emotionally and intellectually connect with an audience, and one technique is to look people in the eye for more than a few seconds. "In your opening sentence, look at one person as you say the entire sentence," suggests Fripp. "Others will feel that sense of connection. Then move on and make similar eye contact with others throughout your speech."

Think of the speech as a date with a lot of people: If you talk about yourself too much, the audience will feel excluded. "Don't say, 'When I was growing up, my father gave me this advice,'" Fripp advises. "Instead say, 'I don't know what advice your father gave you when you were growing up, but my father said XYZ.' You draw the audience into your words."

Most importantly, don't forget to have fun. If all else fails and you're so nervous you can barely stand still, just remember that age-old trick: Look at everyone in the room and imagine them in their underwear. Then, with a private grin on your lips, start your speech.