Should You Go to Work When You’re Sick?

For the sake of your health—and everyone in the office—it's really best if you call in sick and just stay home. 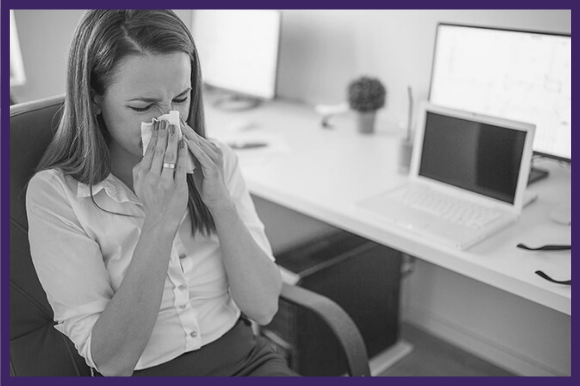 Do everyone a favor and keep your germs to yourself.

As it is right now, we're in the middle of flu season, which means many Americans with fevers, coughs, and runny noses are being forced to make a decision: Go to work sick, as miserable as that may be? Or stay home to get better, but face a huge backlog of work upon your return?

Granted, not everybody has a choice. Depending on your situation, you may not have the luxury of calling in sick—that's a whole other issue the government must tackle (soon). According to the Bureau of Labor Statistics, only 63% of people who work in service occupations have paid sick leave, compared to more than 90% of people in management positions. The Economic Policy Institute says the lost wages from missing three days of work can equal a month’s worth of groceries or their monthly utility bills.

For those of you who are fortunate enough to have sick days at your disposal, it can help to put yourself in your co-worker's (healthy) shoes.

Would you want to be within sneezing distance of anyone who has a cold? (According to the New England Journal of Medicine, sneezing distance is anywhere from 3 to 26 feet.) Do you want to listen to an orchestra of gross noises that sick people regularly conduct? (Sneeze, cough, blow nose, sniffle, repeat.) Does your office supply closet contain multiple industrial-sized containers of hand sanitizer? (Probably not.)

Why do people work when they're sick?

There are a number of reasons people head to work armed with a bag of cough drops and a box of tissues. According to a survey of over 2,800 workers by Robert Half, these are the top reasons people show up to work when they are sick:

If you do take a sick day, that doesn’t mean your boss or co-workers are going to take it as a sign of weakness, Monster Careers Expert Vicki Salemi says.

“I’ve seen colleagues go into work to prove something to themselves (and perhaps to show their boss how sick they really were) only for the boss to say, ‘Go home, get better,’" Salemi says. "Although there are some bosses and co-workers who may think nothing of working through an illness, the reality is you have the right as an employee to set your own boundaries and know what you’re capable of.”

Money can be an issue, too. For some, not showing up for work can mean not getting paid. About one-third of those surveyed by NSF said they can’t afford to be sick and miss work, which you can chalk up to the fact that only 10 states plus Washington D.C. require paid sick leave.

What should you do if you’re sick?

The last place you want to be when you’re sick is at your desk. But the call is yours to make. Be smart.

“People’s systems are all different, whether you’re coming down with a cold, in a full-on cold, or recuperating from the flu,” Salemi says. “That said, when you wake up and literally can’t get out of bed, head is stuffy, can’t focus your eyes, that’s a sign to absolutely stay at home.”

But you definitely shouldn’t let it get to that point.

Part of taking care of yourself means surrendering to the fact that you’re too sick to get to the office and get work done like you usually would. So when you tell your boss, keep it simple. Nobody wants to hear about the grimy conditions you’re in. Set up a short sick day email to let colleagues know you're unavailable.

“Your boss’s reaction should be one of understanding and compassion,” Salemi says, “especially when taking one day can save you an entire week ahead of being on the sidelines.”

If you feel sick while at work, the CDC recommends separating yourself from other people in your office and—surprise—going home until at least 24 hours after your fever is gone without the use of of fever-reducing medications, or after your symptoms have improved (at least four to five days after your flu symptoms started).

What if you're sick...of your job?

Are you sick at work or sick of work? A miserable job can leave you with proverbial aches and pains. There's no need to suffer through that. Need some help with that? Join Monster for free today. As a member, you can upload up to five versions of your resume—each tailored to different types of jobs that interest you. Recruiters search Monster every day looking to fill top jobs with qualified candidates, just like you. Additionally, you can get job alerts emailed right to your inbox, which cuts down on the amount of time you’d spend combing through ads. Let the experts at Monster help you forge ahead on a healthy career path.