Tattoos at work: Show and tell?

A teacher in France lost his job over his extreme body art. These are the guidelines for displaying your tattoos on the job. 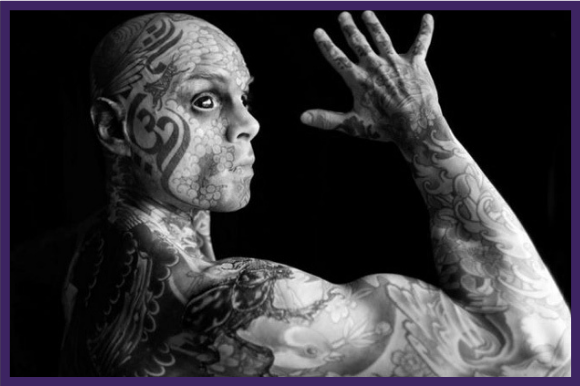 The topic of tattoos in the workplace has (forgive us) resurfaced recently. Last year, Sylvain Helaine, a kindergarten teacher at the Docteur Morere Elementary School in Palaiseau, France, lost his job after the parents of a 3-year-old student (who was not taught by Helaine) complained of nightmares after encountering the teacher. Here's the thing: Helaine is completely tattooed. Completely. As in body, face, and tongue—not to mention the whites of his eyes were surgically turned black. Yowza.

Wondering if you cover your tattoos at work or for a job interview? That depends. If you've got a butterfly on your ankle, the name of your kid on your arm, or even a giant back piece of Meatloaf's Bat Out of Hell cover art, you're going to have an easier time getting by than if you have, say, your face, neck, and palms inked.

These are the guidelines for when, how, and if you can freely flaunt your tattoos in the workplace.

The decision on whether to reveal tattoos at work depends in large part on your field and your work environment.

"You have to use your own discretion in terms of what's appropriate and what's not appropriate," says Stephen Viscusi, a corporate headhunter and author of On the Job: How to Make It in the Real World of Work. "There's no right or wrong answer. It has to do with the industry you're in, and what's acceptable for that industry."

If you're unsure about how your tattoo will be received in a job interview, cover it up, recommends Donna Flagg, president of the Krysalis Group, a New York City-based human resources and management consulting firm. "I would always play it conservative because you just don't know enough about the organization yet."

Don't let an especially prominent tattoo upstage your appearance as a professional.

"It's fine to be an individual, but anything that's going to separate you isn't necessarily a plus," says Viscusi, who also hosts a syndicated radio show on workplace issues. "If it's a snake, a religious image, or an ex-husband or ex-wife, it distracts from who you might be. Instead of being the smart person in cubicle so-and-so, you're the one with the snake."

If your company has a no-tattoo rule—or a dress code stipulating tattoos should be covered—you could run the risk of being fired if you don't conform. Covering your tattoos for work might be non-negotiable.

"It's really about an agreement," Flagg says. "If we state clearly we have a no-tattoo policy, then displaying yours could be grounds for firing, just like with any policy."

People in their 20s, 30s, and 40s are more likely to view tattoos as just another fashion accessory, while older colleagues or bosses may think otherwise.

"It's a generational conflict," Flagg says. "Even in a cool, hip company, there are still people who ascribe meaning to tattoos...and think they are a rogue or rebellious thing to do. That's not how it's being seen in the generation that's having them done."

Need to find a job where tattoos in the workplace aren't written off? Join Monster for free today. As a member, you can upload up to five versions of your resume—each tailored to the types of jobs that interest you. Recruiters search Monster every day looking to fill top jobs with qualified candidates, just like you. Additionally, you can get job alerts sent directly to your inbox to cut down on time spent looking through ads.