Why are so many health care workers going to work sick? 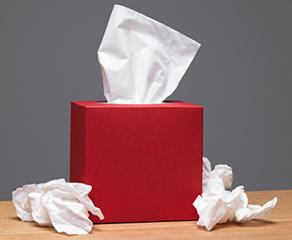 You feel lousy. But like the warrior you are, you march to work anyway.

You’ve got plenty of company, as a 2015 study in JAMA Pediatrics proved. Researchers surveyed more than 900 clinicians and found that 94% believed working when sick puts patients at risk. Yet, they didn’t call in sick due to challenges finding coverage, the norm of working through sickness, and—this one should sound familiar—not wanting to let colleagues and patients down.

But working through your illness could be an unhealthy approach to your own health and that of your patients.

A responding editorial in JAMA Pediatrics noted that while health care workers live by the principle of “do no harm,” they actually do the opposite by coming in sick. Health care workers, the researchers wrote, “can transmit a variety of infections to patients during routine clinical activities. Even common but untreatable infections like enterovirus and respiratory syncytial virus can prove deadly to immunocompromised patients.”

And there are additional risks to working while ill: If you’re feverish or really feeling badly, you may not be thinking straight and your actions could endanger a patient. There’s a word for this: A 2010 report in the Journal of General Internal Medicine defined “presenteeism" as occurring when an employee goes to work despite an illness that prevents full functioning.

Let go of your ego

“Each of us feels no one can take care of our patients like we can,” says Barbara Bergin, M.D., an orthopedic surgeon in Austin. “Ego too big? We're not producing hamburgers or widgets. We have a very personal relationship with our patients, and many will cancel appointments rather than see someone else. We know that.”

She recalls once having been struck with food poisoning and, with two surgeries scheduled, she came into the surgery center anyway and had an IV started for herself so that she could go ahead with them.

But if you do have the luxury of backup, let go of your ego and use it. "As a clinician with over eight years in practice, I tend to stay home while dealing with a common cold or flu, if shift coverage is provided,” says Elena Rom, R.N., B.S.N. and CEO at Abcor, a home health care agency in Chicago.

Know what your boss expects

The bar is set very high in health care jobs, says Theresa Brown, R.N., and author of the book, The Shift: One Nurse, Twelve Hours, Four Patient’s Lives. “In this culture, you come to work unless you’re profusely vomiting blood,” she says, “so it’s unclear what actually constitutes ‘too sick to work.’”

But she suggests that breaking down that culture can happen starting with you. Start by asking your manager about the company’s sick-day policy and what he or she defines as too sick to work. This is especially important as you start a new job.

Draw your own line

Caring for adult patients in the critical care environment and working as a travel nurse, Jen Fox, R.N., M.S.N., author of the “Wanderlust Nurse” blog, is not entitled to paid sick time. “I could also have my contract cancelled if I miss more than one scheduled day,” she says.

So she differentiates between what’s a must-stay-home and what’s okay for the job. “An upper respiratory infection is much more tolerable at work than a gastrointestinal illness,” she says. “Also, I would not go to work with a fever.”

Even if your definition of what’s truly sick doesn’t line up with your boss’s, “don’t be shy about going to your doctor when you are sick and getting a note,” Brown says. If you need more ammunition, pursue the Family and Medical Leave Act (FMLA) and reach out to your union for support.

If you do go to work, at the very least do what Rom does: Wear your personal protective equipment, such as mask and gloves, at all times. Keep your sickness to yourself, and hopefully your colleagues will do the same.