The hostile work environment checklist: How toxic is yours?

This is how to recognize a poisonous job situation and the steps to take in response. 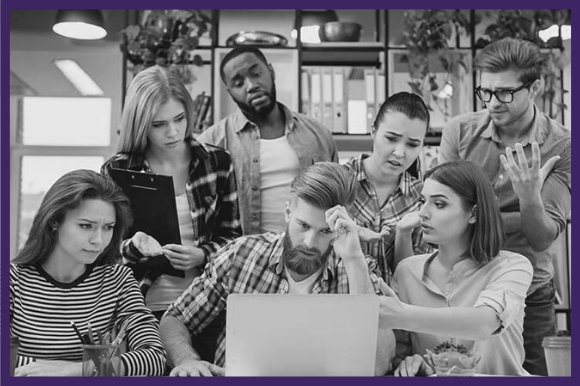 A hostile work environment is a surefire way to exponentially increase the levels of workplace stress you deal with on a daily basis. Granted, this is hardly a phenomenon. Everyone has a bad day (or even month) at work now and then. Your client presentation didn’t go as well as planned; your boss didn’t fall head over heels for your proposal; you had to stay late to finish a project; your co-worker’s been having a series of too-loud sales calls. But there’s a big difference between aggravating incidents and a full-blown toxic work environment.

What is a toxic work environment?

A toxic work environment is one wherein dysfunction and drama reign, whether it’s the result of a narcissistic boss, vindictive co-workers, absence of order, et cetera. Basically, a hostile work environment “leaves you feeling like dirt,” says Robert Sutton, a Stanford University professor who studies organizational behavior and author of The A**hole Survival Guide.

In addition to harming your morale, this kind of climate can also be damaging to your health, says Paul White, co-author of Rising Above a Toxic Workplace. “Stress takes a toll on your body,” White says. Health problems stemming from a hostile workplace include hypertension, cardiovascular disease, and decreased mental health, and can lead to fatal conditions, research from Stanford and Harvard Universities found.

“A toxic environment keeps people in a fight or flight mindset—the constant pump of cortisol, testosterone, and norepinephrine generates physical, emotional, and mental stress,” says Cheri Torres, an Asheville, North Carolina-based business leadership coach and author of Conversations Worth Having: Using Appreciative Inquiry to Fuel Productive and Meaningful Engagement. She says you can’t do your best work when you work in a toxic workplace, and your health and well-being is at risk.

To counteract such conditions, you first need to know what you’re looking for. Read on to see if you’re in a potentially toxic workplace, plus ways to restore calm on the job.

Signs of a toxic work environment

Waking up every day and dreading going to work? You’re not alone. An international poll by Monster found that 42% of U.S. workers have left a job due to an overly stressful environment. Furthermore, stress levels are often amplified when someone’s job eats into their personal time with friends and family, according to a Paycheck survey.

It can be difficult, though, to self-asses your own stress levels within a hostile workplace. To get an accurate reading, take this short quiz from the American Institute of Stress.

In a hostile workplace, employees are often overloaded with job responsibilities. Unfortunately, being overworked can lead to burnout and cause resentment: A survey from the Families and Work Institute found that 43% of employees experiencing high levels of feeling overworked say they feel angry toward their employers often or very often.

The Workplace Bullying Institute defines bullying as “repeated mistreatment of an employee by one or more employees; abusive conduct that is threatening, humiliating, or intimidating; work sabotage; or verbal abuse.”

Stop right there—office gossip benefits nobody. Still, many employees spread rumors about co-workers, whether it’s done intentionally or unintentionally. Regardless of what side of the gossip fence you’re on, it can create a toxic workplace, which contributes to the poison circulating.

A toxic manager is the lynchpin of a hostile work environment, someone who consistently hurts your self-esteem and routinely undermines your ability to put out good work. The concept of leadership clearly went directly over his or her head.

How to detoxify your workplace

If you want to take a more head-on approach, there are two solid ways to go about it: alone or with a group.

You should be able to resolve many interpersonal problems without intervention. “Generally, your best first step is to have a gentle backstage conversation with the person who’s causing you harm,” says Sutton. But, rather than focusing on how someone’s behavior makes you feel, focus on the negative consequences of the person’s actions.

For example, if a co-worker is consistently belittling your ideas during team meetings, you’d approach by saying, “I understand you want to offer feedback, but when you interrupt me, it makes it difficult for me get my ideas across to the team.”

Option #2: Confront with a team

If the direct approach is futile, you may have to get help from your superiors (assuming they’re not the problem) to resolve serious issues with co-workers. But before you request a meeting, there are a couple measures you should take.

First, figure out if any of your peers are having similar problems. “The more fellow victims you have, the more power you have,” Sutton says. Obviously, you don’t want to bombard your co-worker; one or two representatives in addition to yourself should suffice.

Second, gather hard evidence to prove your case. For example, if your colleague is frequently trying to sabotage your work by turning their assignments in late, compile emails that show times when this has happened and present what you have in the meeting.

Some companies simply have a culture of dysfunction. If the toxicity is coming from the top down, you may be better off coming up with an exit strategy.

Of course, it’s easier to get a job offer when you’re still employed—meaning you’ll want to have a job lined up before you put in your two weeks’ notice. Need some help freeing yourself from the grip of a toxic work environment? Join Monster for free today. As a member, you can get job alerts sent directly to you, plus you can upload up to five versions of your resume—each tailored to different jobs that interest you. Recruiters search Monster every day looking to fill top jobs with qualified employees, just like you. Life’s too short to hate your job.