Need a hand climbing the corporate ladder? Form meaningful relationships with these colleagues. 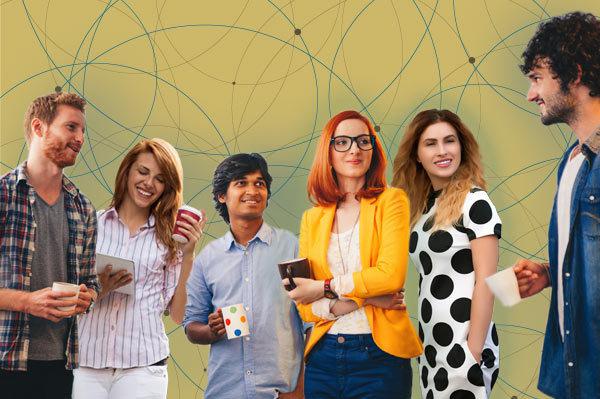 For a thriving career, you need a great support system. That’s why you need to pick your office posse carefully.

“No matter where you work, you’re in a relationship business,” says Brad Karsh, CEO of Chicago-based professional development firm JB Training Solutions. However, if you’re like most millennials, technology may very well be inhibiting your ability to communicate and bond with co-workers.

Admit it: you’ve sent a work email to the guy in the next cubicle, instead of standing up and actually having a conversation with them. Unfortunately, “so much is lost without interpersonal connection,” says Peggy Klaus, executive coach and author of The Hard Truth About Soft Skills: Workplace Lessons Smart People Wish They’d Learned Sooner.

Focus on cultivating authentic relationships with the right colleagues—the ones who can help you get a raise, promotion, or exposure to company brass. Not sure who those people are, aside from your boss? Don’t fret: we’ve compiled a list of who you want in your inner circle.

Studies show that having a work BFF can not only improve job satisfaction, but also boost performance and productivity. Therefore, fully embrace the colleague you know, like, and trust the most out of your peers. Bear in mind, though, that the relationship should form organically: “You’ll by nature find people you click with more than others,” says Karsh.

It feels good to commiserate about the boss—or laugh harmlessly about a co-worker’s bad hair day—but you don’t gain much from doing so. Thus, you want an office BFF whom you can vent to, but also rely on for honest feedback. “If you’re truly looking to grow, you need a friend who is going to hold up a mirror and push you to be a better worker,” says Klaus, so buddy up with a straight shooter.

2. A confidant in HR

There are clear benefits to forming a relationship with someone who has access to information about job openings before word gets out, among other insider knowledge. Surprisingly, many employees don’t keep in touch with HR after they get hired, says Andrea Kay, a career consultant in Cincinnati. “It’s shocking, given how people in HR are so informed about the company,” she adds.

To build rapport, connect with an HR rep on a monthly basis to discuss your career goals—and make sure to do it in person. It’s all too easy to rely on email as a crutch, but face time is the most important part of developing and maintaining strong relationships, market research consultancy Wakefield Research found.

Be transparent when expressing your career objectives. “Unless you tell someone in HR that you want to work in a different department, they don’t know you’re interested in those types of opportunities,” says Karsh.

3. A sponsor with clout

Enlisting the help of a mentor is one thing, but bonding with an employee with influence—someone who can endorse your skills and put in a good word to your boss when it comes time for a promotion—can give you a competitive advantage over your peers.

If the company doesn’t have a formal mentoring program, approach the person directly, and be specific in your request. “Tell the person why you’ve always admired their work, and ask if they would be willing to mentor you in certain areas that you’re looking to improve upon,” says Klaus.

Set expectations for how frequently you’d like to meet, says Kay, and touch base before your compensation review with the boss. Assuming you’ve fostered the relationship, it’s kosher to ask for the sponsor’s endorsement. Consider procuring several mentors, such as those in other departments, to expand your network.

Why get in bed with the enemy, you ask? Because a savvy worker sees the value of turning adversaries into allies. “Oftentimes, you complement each other’s strengths,” says Kay. By collaborating with them—rather than squaring off—you can improve your skill set and your reputation.

Work together on a project where both of you can shine, and then publicly praise the other person’s contribution. “The boss will see you as a team player,” says Klaus.

This person could be the receptionist, your boss’s assistant, or an admin to someone in the C-suite. While their role may vary, these people have something important in common: access to the higher-ups. “Even though you might consider receptionists to be lower on the corporate ladder, they often have the ear of senior management,” Karsh points out, “and they may be able to get you into an executive meeting you wouldn’t normally attend, or give you a heads-up about a new project coming down the pipeline.”

Take these people to lunch, out for coffee, or simply ask about their plans for the weekend. Don’t forget that small gestures, like bringing donuts to the office, always improve likeability.