Benefits of Having Affinity Groups at Work 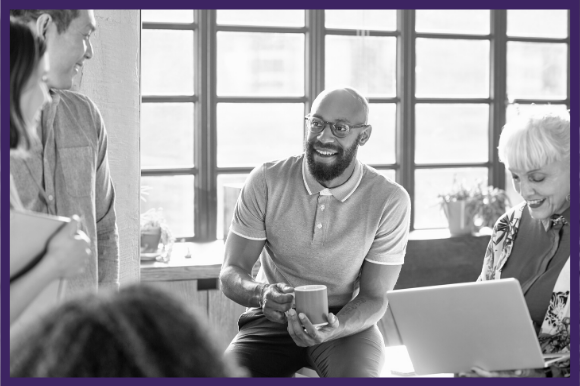 Want to join a company with a diverse workplace? Focus your job search on employers that have affinity groups. In a nutshell, an affinity group—also called an employee resource group (ERG)—is a group of employees with similar backgrounds, interests, or demographic factors such as gender or ethnicity. Affinity groups can take many forms, such as women's leadership groups, religious groups, LGBTQ groups, or caregiver groups.

Many companies support these employee resource groups because of how much they contribute to the overall company culture. According to a study by Old Dominion University, 66 of the Fortune 100 firms mentioned affinity groups on their websites. Xerox is known for pioneering the first in 1970.

Check out some of the main benefits of having affinity groups at work.

By definition, affinity groups enable employees to come together and build connections based on shared characteristics or interests. This bolsters communication and collaboration, which can make workers more effective and increase their productivity.

Studies show that affinity groups can improve retention efforts, reducing turnover costs. Indeed, the average replacement cost of a worker is about $15,000, according to the Work Institute's 2019 Retention Report. On a larger scale, a 100-person company that provides an average salary of $50,000 could have turnover and replacement costs of approximately $660,000 to $2.6 million per year depending on their retention rate, Gallup reports. Having happy, engaged employees means fewer turnovers.

During Monster's LGBTQ Pride and Work panel, Brianna Boles, diversity and inclusion program manager at Adobe, told viewers, "As you're in the interview process, asking if a company has ERGs or communities for underrepresented groups is a great indicator of inclusion."

Many companies have found affinity groups can improve their onboarding or training processes and make it easier for new employees to assimilate into the company's culture. That can be a huge boon, considering that a recent Monster survey found that three in four Americans (75%) have had a job where they didn't feel they were a good fit for the company, and half (51%) have felt this way in two or more jobs.

A study by Shelton Goode, the director of diversity and inclusion for Oshkosh Corp., found that affinity groups help new employees get comfortable during the onboarding process. Moreover, “studies show that the first 60 to 90 days of employment are a critical time for any new hire, and they can be particularly challenging for members of traditionally underrepresented groups,” he wrote.

From a legal standpoint, affinity groups can help employers identify gaps and avoid discrimination issues. That's crucial, given that U.S. companies must comply with the regulations of the Equal Employment Opportunity Commission (EEOC), which prohibit employers from discriminating against existing or potential employees based on protected characteristics, including race, color, national origin, ethnicity, religion, age, sex, or medial history.

In the Monster Pride panel, Kay Martinez, associate director of the office of diversity, equity, and inclusion—as well as a faculty member—for Massachusetts General Hospital's (MGH) Institute of Health Professions, explained that Xerox introduced ERGs back around the time of the assassination of Martin Luther King Jr. “That's when we first saw mass demonstrations led by Black students demanding that they want Black studies, ethnic studies, and offices that were dedicated to multicultural affairs," Martinez said. "It all came from that era where people demanded change."

Affinity groups can go a long way with helping employees bond with co-workers. That pays off in a couple big ways. According to a 2014 Workhuman survey, 89% of workers say work relationships matter to their overall quality of life. And research from Olivet Nazarene University shows that work friendships make employees more productive.

Start an Affinity Group at Your Office

Looking to form an affinity group at your company? Start by contacting human resources and let them know of your intentions—you may need to submit a formal pitch. After HR gives the green light, create a clear definition of what will unite your affinity group and a mission statement that identifies the group's core values. Then start recruiting colleagues that would make great additions to the group.

An affinity group can help you love your job and make you feel part of a community. Does your current job lack in that area? Want to join a company that values a variety of voices? Join Monster for free today. We have loads of free resources that can help you fast-track your job search.