10 ways to get your work noticed by senior staff

Employee recognition can often require a bit of effort on your part—but it’s worth it. These tips will teach you how to toot your own horn and get acknowledged. 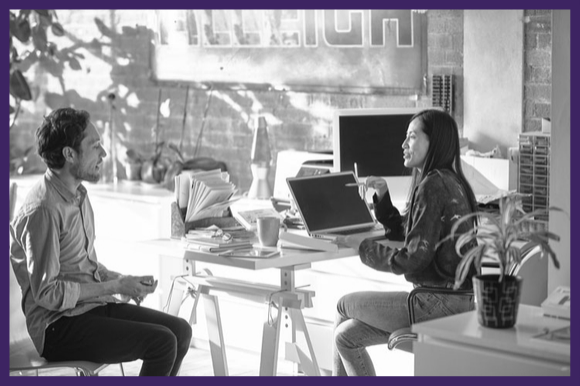 Show your bosses what you're capable of.

After years in the workforce and developing an unwavering work ethic, you can kick back and wait for your peers, your boss’s boss, and industry superstars to lavish you with their admiration. That’s how employee recognition works, no? Not quite. You need to toot your own horn now and again if you have any hope of getting ahead. We know self-promotion doesn't come as easily to some people as it does to others, but it's necessary in the workplace.

According to their study “The Gender Gap in Self-Promotion,” professors Judd Kessler and Christine Exley found that men are more comfortable with self-promotion than women, the latter of which consistently rated their performance on a test lower than did men, even though both groups had the same average score. On average, men gave themselves a 61 out of 100; women gave themselves a 46 out of 100.

No matter how great at your job you are, don’t expect people to naturally notice who you are and how much you have achieved. In fact, you’re likely going to have to take a few extra steps to turn the heads of the higher-ups.

Making a name for yourself has value beyond simply credit for credit’s sake. “Visibility of your work is critical if you want to further your career,” says Ben Brooks, CEO of New York City–based PILOT, which helps people find happiness at work. “Just imagine if your company had to lay off staff. Having your work and efforts be unknown makes you vulnerable.” Plus, it goes without saying that you’ll be a much hotter prospect on the job market.

Whether you’re seeking a raise, a promotion, or a fantastic new job, learn a few ways to use self-promotion to get your hard work acknowledged and admired.

Shiny statues and medals aren’t just for actors and athletes. No matter what job you do, chances are good that there’s an organization(s) handing out honors within your industry. If you're wondering how to get promoted, having an award on your desk certainly plays in your favor.

Search publications and associations in your industry, both locally and nationally, for awards and recognitions they give out, as well as internal employee awards from your company. Research what accolades your role models have received and find out what it takes to qualify, Brooks says, then ask your mentor for suggestions of which awards to apply for.

Public speaking is one of the most common fears, but if you can shake off that terror and become comfortable with it, it's one of the most powerful self-promotion tools that can pay off big for your career.

Don’t wait for the invitation to come to you. Get to know conference organizers, as well as past speakers and sponsors, Brooks says. Larger conferences will have a more formal process for vetting and accepting speakers; speaking at smaller, local gatherings can be as simple as volunteering for the job. In either case, coordinate with your manager and public relations team, Brooks says.

Don’t let fancy titles make you nervous. Senior managers are often more interested in your ideas and contributions than you might realize.

“Give a compliment where it’s due. Make a suggestion if you have a good idea. Get to know senior management as people,” says Skip Prichard, a Dublin, Ohio–based leadership blogger and president and CEO of OCLC, a global library cooperative. But do so tactfully. “Don’t force the issue in an unnatural way,” he says. “You don’t want that reputation, and most people see through it.”

What does work with the C-suite: Volunteer for their pet projects, or attend a talk they give and let them know what you found insightful, says Farnoosh Brock, career coach and founder of Prolific Living in Cary, North Carolina.

You don’t need to knock on your boss’s door every hour to stay on their radar. Instead, develop succinct, timely updates and use your boss’s preferred method of communication to share them. That could be email or instant messenger, or it could be a regular face-to-face meeting.

Emphasize the impact your work has had on the company, not just your activities, Brock says. “Instead of telling your boss you smoothed things over with an upset client, tell him you saved the company $1 million a year by saving an account from canceling,” she says. Toot your own horn, then connect the dots.

Help your boss with his or her own headaches

Being the boss is tough. Make it a little less tough, and you’ll have a reliable champion in touting your accomplishments. Find out what stresses your boss the most, and then focus some of your energy and time toward tackling those problems, Brock says.

It might be as simple as fielding certain client phone calls or taking over weekly reports. Or it could be as complex as brainstorming solutions for a particularly thorny issue that she’s facing.

Getting ahead often means getting involved. Whether it’s planning the company’s Christmas party or joining the workplace safety committee, volunteering with internal working groups will expose you to new players and show that you’re broadly engaged in the business—not just the nitty-gritty of your job.

This kind of participation can go a long way toward helping your work to shine, as long as you choose the right opportunities. “Know what’s important to your role,” Brock says. “Just because the activity is out there doesn’t mean it’s valuable to you.” Ask your manager to suggest internal activities that will let you leverage skills you already have, as well as learn new ones.

Partner with co-workers in other departments

You don’t have to join a formal committee to broaden your circle at work. There’s plenty to be said for just putting yourself out there as a resource for co-workers’ projects.

Look for ways to collaborate with others who are in different departments, at different office locations, or in different functions of the business. “By involving others, you weave a wider net that gives you and your work more visibility,” Brooks says.

You’re not the only one who craves a little public kudos. Share the love by taking the time to praising other people’s good work. This will build your reputation as a source of good energy within the company.

When you see your coworkers doing something awesome, send their managers an email complimenting their work, Brooks says. When appropriate, give them shoutouts on social media. Your co-workers will appreciate the props and likely return the favor.

Learn to humbly accept a compliment

Shake off any awkwardness you feel about being complimented and accept the positive attention gracefully. Luckily, there is plenty of room between coming across as narcissistic or too self-deprecating, Brock says.

You can’t go wrong with a smile and a simple, “Thank you, it was my pleasure.” This lets the person complimenting you know that you appreciate the kind words and recognition.

Get another job offer

Word gets around. When you do great work and get recognized for it, your co-workers likely won’t be the only ones who notice. Getting another job offer might make you seem even more desirable, if your company wants to keep you. However, you have to be careful how you play this card, because it can backfire. Position it as the job offer came to you, as opposed to the opposite.

Brooks suggests holding off on mentioning another job offer—assuming you don’t take the new job—until further down the road, that way the moment has passed and your vacancy is not an imminent threat. “You can share with your boss something like, ‘A few months ago I was given a job offer by another well-regarded firm, which really forced me to think about what I wanted. It was a fairly easy decision as I just love working here and for you.’”

Of course, there’s no harm in seeing what other jobs are out there, and now that you’ve gotten people’s attention, chances are they’ll be vying for yours. Need some help taking the first step? Join Monster for free today. As a member, you can upload up to five versions of your resume—each tailored to the types of jobs that interest you. Recruiters search Monster every day looking to fill top jobs with qualified candidates, just like you. Additionally, you can get job alerts sent directly to your inbox to cut down on time spent looking through ads. Toot your own horn with a little help from Monster.