The 5 new boss moves that will make you office poison

Congratulations. You’re the boss! Now, you’ve got to figure out how not to eff it up. 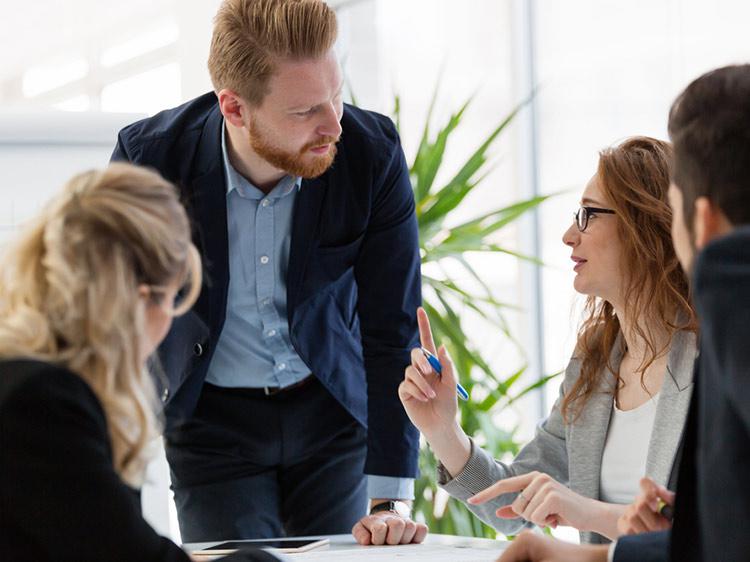 Avoid these new boss mistakes if you want your team to actually like you.

Congratulations. You’re the boss! Feels pretty good, right? Now, you’ve got to figure out how not to eff it up.

You might feel like the ultimate GOAT as you ride the elevator up to the first day of your new gig, but when Gallup surveyed U.S. adults, they found that 50 percent of employees left their job "to get away from their manager.”

Don’t be that manager.

Here are the worst mistakes new bosses make— and how to avoid them.

Sure. You’re the boss now so you don’t want to be doing shots with your team or sharing TMI about your personal life, but you can (and should) show your personality. Nobody wants to work for a robot.

“Too often new managers are taught that now that they are in a management role, they must divorce themselves of any type of personal connection to their team,” says Tamica Sears, founder of career coaching company, Sears Coaching.

Strike up friendly conversations and learn about the people who work for you.

“A trap that new managers often fall into is walking in with marching orders to clean house,” says Sears.

“If you ever receive this directive, respectfully decline,” she says..”Take some time to get to know your team, what motivates them, what has gone wrong in the past and why.”

If you start replacing people right away, you might miss out on getting to know the talented team members who’ve been at the company for a while and know the ins and outs of their role and the organization.

“Always take the time to form your own opinions, free of bias and prejudgment. You may find that the team that you discover is miles apart from the team that you thought that you inherited based on someone else’s perception of them.”

New boss mistake #3: Making your presence known all the time

Bigfoot doesn’t belong in the boardroom.

“Many new bosses think that they have to make their mark quickly and dramatically in order to be successful—which leads to what I call ‘the bigfoot,’” says Mary Abbajay, author of Managing Up: How to Move Up, Win at Work, and Succeed with Any Type of Boss.

Like King Kong, they stomp in, take control, and change everything without taking the time to get to know the current team members and processes.

“Instead, new managers should start by getting a clear sense and understanding of the team's needs, wants, and challenges, says Abbajay, “Take the time to learn what is and isn't working and involve the team in creating better products and processes.”

Everyone wants to climb up the corporate ladder, but there’s another way to operate that could be even more effective.

Help your team up instead of pushing them down or keeping them paralyzed on one rung until they lose patience and quit.

One of the biggest mistakes new bosses make is to only discuss development goals during annual reviews and to fail to teach people new skills and share their knowledge.

“They use the 'throw people off the cliff' approach to development,” says Halelly Azulay, founder of development firm TalentGrow.

“They don't tolerate failure and criticize or punish mistakes.  Or, they try to 'save' people from mistakes and don't allow them to learn and experience consequences,” says Azulay.

There has to be a middle ground between having a sink or swim attitude and micromanaging forever while your team members are still wearing floaties.

“To fix or avoid this mistake, new bosses should develop people and make it safe to make mistakes,” says Azulay.

Consider having weekly or month one-on-one meetings to talk about long and short-term goals and help people achieve them through support, not micromanaging.

Some managers avoid difficult conversations at all costs, especially if they’ve been promoted and are now managing to people who were previously on the same level.

But remember that your direct reports can’t grow and exceed your expectations if they have no idea what you want.

By not giving feedback that you perceive to be harsh, you’re actually hindering your team more.

“It's far kinder to tell your team what you're thinking than it is to spare their feelings by avoiding the topic,” says Kimberlee Stiens, founder and CEO of career coaching firm ranavain.

“Before you know it, you'll be six months into the job and, rather than helping your team succeed, you've been watching them fail over and over again in the same ways,” she says.

Give feedback calmly and thoughtfully instead of yelling IRL or sending an all-caps email. (It’s called constructive criticism for a reason.)

And don't forget your manners. Say thank you and tell people when they're doing a stellar job.

“That will build the trust needed for them to receive your more critical feedback with grace and an open mind, which will help them turn things around and help you see how important your feedback is to their careers,” says Stiens.

As you grow into your career and your new role as a manager, the last thing you want to do is coast.

There are so many resources out there, from online courses you can take,  books you can read and management tips here on Monster.

Join Monster, and we’ll send you career advice like this in your inbox each week—as well as our latest job listings for the day when you’re ready to take your polished management skills to a whole new level—and team.