Some thoughts are best kept to yourself—especially when a job is on the line. 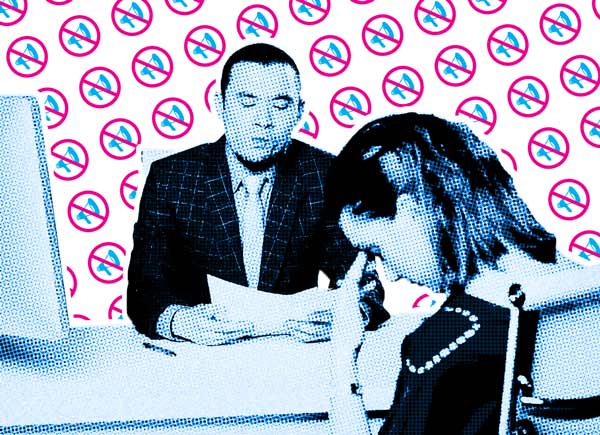 As a young recruiter named Eminem once wisely advised me, “You only get one shot, do not miss your chance to blow. This job opportunity comes once in a lifetime, yo.”

It sounded amazing! I eagerly awaited the interview, dressing in my nicest wares, smelling of musk and determination.

Unfortunately, I said all the wrong things. Needless to say, I had blown my one shot and didn’t get the job.

The good news is if you take advice from the people who know best—hiring managers, recruiters, and experienced interviewers—you don’t have to be like me.

Consider this your guide to memorizing what you should never say in a job interview.

Don’t say, “I see this as a stepping stone.”

Dr. Chester Goad, director of disability services and a graduate instructor at Tennessee Technological University, warns interviewers to stay away from positioning themselves as more important than the job.

“Probably one of the most damaging things a candidate can say is that they view the position as a stepping stone or springboard for their career,” Dr. Goad says. “It certainly may be true, but it's one of those things a candidate should think rather than say.”

A response like that, he adds, sends the message that you don't plan on sticking around for long. For employers and hiring managers, that's a red flag.

Perhaps the worst thing to bring up in your interview is how terrible your former job or boss was.

“It shows lack of maturity and it makes the interviewer think the candidate could just as easily say the same things about their new employer,” he says. “It's okay to talk about a less than ideal situation, but never blame your former employer.”

Above all, if you had legal trouble with your former employer, you definitely don’t want to bring it up. John Rampton, founder and CEO of Due, a California-based online invoicing and time tracking platform, has actually had this happen with candidates.

“The worst thing you could say in an interview is that you’ve sued your last company,” Rampton says. “I recently had someone bring up in an interview that they had sued their last company for harassment. They went on to tell me the story which in my mind could be something that happens at every business out there. I don’t want that person involved in my business to risk having the same thing happen.”

When it comes time for you to ask questions of the interviewer, Christopher Latter, co-founder and chief marketing officer of Trendii, a collaborative and creative social commerce platform headquartered in London, recommends asking questions about the clients, the job requirements, and the team. “What I wouldn’t recommend is asking about pay raises, the length of your lunch break, when you can take your first holiday, or where the best places to eat are,” he says

Motivational speaker and consultant Barry Maher has similar advice on interview questions from the candidate.

“One of the most common and most damaging mistakes applicants make comes when the interview is almost over. The interviewer asks if the person has any questions. Often you can see the applicant visibly relax. The worst is over,” says Maher. “Then their questions show more interest in what the company can do for them than what they can do for the company.”

Maher remembers one job applicant asking lots of questions about vacation time: How much do I get, when am I eligible, how do I accrue more days?

Jon Simmons is a contributing writer for Monster.