Don’t say anything you wouldn’t want getting back to your boss. 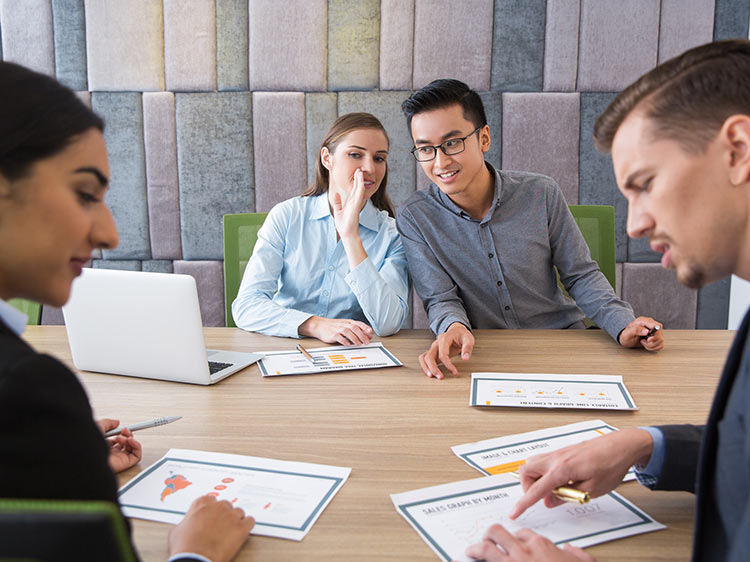 Don't talk about any of these things at work.

There are some topics that are always NSFW. (Yes, even with your work friends.)

When you are close with your coworkers and have lunch together daily or hang out outside of the office, it’s easy for the lines between personal and professional to get blurred.

Even if you’re not BFFs, it’s normal to want to chat about things other than work projects with the people you share space with for 40 hours a week. But there are some things that are always better left unsaid.

“Work is your livelihood. It is not a social club,” says Cheryl Palmer, founder of the District of Columbia–based career coaching firm, Call to Career.

There can be severe repercussions for saying the wrong thing at work. At best, you may ruffle some feathers. At worst, you may be fired.

“So even though you may have the First Amendment right to freedom of speech, that doesn't mean that it is advisable to use that freedom without discretion at work,” Palmer adds.

Monster spoke to career experts to find the top 5 topics to steer clear of with your coworkers.

As much time as you spend together, you may not know everyting your coworkers are dealing with in their personal or professional lives.

It’s best not to joke about social movements or sensitive subject matter.

Dory Wilson, founder of the career advice website, Your Office Mom, notes that “jokes” of this nature often show a lack of respect and ignorance.

Here’s a tasteless example she overheard recently: “Over the holidays my mother-in-law forced me to hug her, now I know what sexual assault feels like, #MeToo.”

So even something that seems so ubiquitous that it can’t possibly be offensive just might be. Our advice? Don’t go there.

Now this may sound like a no-brainer, but some people get so comfortable with their colleagues—and even their boss— that they’ll share their desire to move onto something else—with exactly the wrong people.

The thing is, no matter how much your boss likes you, if you leave, she’s got to replace you. It’s business. So your job search disclosure means more to her than a friend making a career move. It’s business.

Same goes for your colleagues. “Don't tell co-workers that you are looking for a new job either,” says Palmer “They may share your secret with the boss.”

One client Palmer worked with was unpleasantly surprised when a new employee showed up for work and informed her that she was there to replace her.  “When the employee confronted the boss about it, he replied, ‘You were looking for a new job anyway.’

It was her coworker who told the boss about her search for another position.

As we all know, political topics can be polarizing and no matter how woke your co-workers appear, you should never assume that someone shares the same viewpoints as you.

“Political topics should be avoided at all costs,” she adds. So you might want to keep your political mug at home, unless it says “Vote for Pedro.” (In which case, same TBH.)

Taboo topic #4: Gossip about your boss (or any coworkers):

“You may think that you are just airing your grievances with another coworker who shares your frustration about how the boss handles things, but you could be unpleasantly surprised to learn that this coworker is friendly with the boss and will happily tell everything that you shared,” says Palmer.

Even if Marcus doesn’t betray you, people talk and word can get back to your boss quickly. You may not have even started the gossip, but by taking part in it you might tarnish your reputation. So, steer clear of it.

Even if you’re not complaining about work, being a whiner will give you a bad reputation in the office.

“Chronic complaints do not accelerate careers,” says Selena Rezvani, vice president at career coaching firm, Be Leaderly. “If they did, people would label them solutions, suggestions, or proposals.”

She warns that chronic complainers could be seen negatively in a few ways: First, as unproductive because it’s hard to produce quality work and have time to complain constantly.

Also, bad at adapting to change, if you constantly complain about changing processes at work.

Finally, incapable of taking responsibility, because you often find fault in others, but may not look critically at your own behavior.

Take your professionalism to the next level

At any rate, it’s always a good habit to keep your ears and eyes open to new opportunities.

Without talking about it, of course, join Monster. As a member, you’ll get job alerts as well as career advice to help you better manage your career.