In fact, it’s probably the best thing that will ever happen to you in your career. 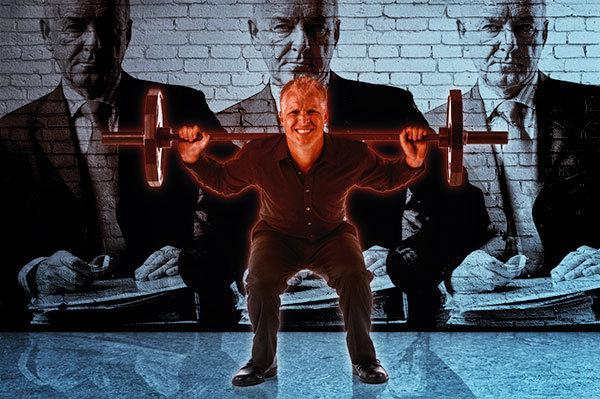 She was an out-and-out terror. Her staff members quivered each time she walked by. Who would she target next with her fury? No one knew. But there she was, sitting atop one of the world’s most powerful media empires. And among those who won entrance into her inner circle, she inspired unparalleled if begrudging loyalty.

I’m describing Miranda Priestly, the fictional fashion editor who served as bête noire in the 2006 film The Devil Wears Prada. Rumor had it that Priestly was a caricature of Anna Wintour, the notorious Vogue editor. Whether or not this is true, Priestly represents a familiar archetype, the villainous boss most of us have heard about, some of us have had the misfortune to work for, and all of us implicitly dread. But what if I told you that some bosses like this are good to work for? What if I told you they might be the best thing that ever happened to your career?

I’ve spent most of the last decade studying the world’s most successful bosses—extraordinary leaders who built fortunes, transformed industries, and spawned legions of successful protégés. Many of these bosses were the benevolent, nurturing figures we idolize, men and women who truly cared about their employees and who maintained deep, intense relationships with them.

To my surprise, however, some of these successful bosses were not so warm and fuzzy. They were what most of us would label a bastard—maybe not so bad as Miranda Priestly, but close. They rode their protégés hard, critiqued their performance mercilessly, and ranted and raved when their protégés made the slightest mistake. They gave employees every reason in the world to hate them, except one: They put their careers in overdrive. For protégés, a few years working for one of these bosses made the difference between a middling career and one that was truly spectacular. For that reason, these bosses weren’t really bastards. They were tough, and working for them was an everyday challenge. They were another breed of boss entirely, one that I fondly like to call Glorious Bastards.

Oracle founder Larry Ellison is the Glorious Bastard incarnate. Although Ellison often discussed the importance of chemistry and teamwork, he led more by intimidation and was known for fostering a brutal, ultra-competitive environment. “He enjoys the losing of the other guy,” a former senior executive told me, “He enjoys it, and that’s kind of sick. . .  It’s who he is.” Ellison himself once remarked, “I invented my own style of management called MBR. MBR stands for ‘management by ridicule.’”

Fortunately for those subject to MBR, Ellison also had an indisputable knack for boosting people’s careers. Gary Bloom, a longtime Oracle employee who has held senior leadership positions at many top technology companies, remembered, “What ends up happening for a large number of people is they end up in positions within Oracle probably years in advance of where they thought they’d be at that level in their career.” Many of today’s top tech executives once worked for Ellison, including Salesforce.com CEO Marc Benioff, Siebel Systems founder and former CEO Tom Siebel, EMC Corporation’s executive vice president Harry You, and veteran tech CEO and board member Mike Seashols.

Another notable Glorious Bastard was advertising mogul Jay Chiat, founder of the advertising agency Chiat/Day which was responsible for Apple’s legendary “1984” commercial unveiled during Super Bowl XVIII. Chiat was an exceptional taskmaster who not only set a high bar for performance but was not shy about letting you know if you fell short. Chiat/Day alum David Murphy told me that he and others working for Chiat “had to be pretty thick-skinned, because if he didn’t like an idea he’d tell you and he’d tell you in no uncertain terms, ‘That’s a really stupid idea, that’s really dumb.’” As Lee Clow, now chairman of TBWA/Media Arts Lab, told me, Chiat was “always demanding of everyone to do something better than they very often knew or thought they could or were capable of.”

All of this pressure worked, of course. As one of his former employees explained, Chiat “left something in people that makes it hard for you to go back to being ordinary. Once you feel it, you can’t change it.” Chiat’s former protégés didn’t at all go back to being normal; dozens of them went on to occupy many of the advertising industry’s top leadership positions.

Working for a Glorious Bastard is the corporate equivalent of Hell Week for aspiring Navy Seals, or Beast Barracks for West Point graduates. It’s an initiation into a society of high-performers bonded by the intensity and pain of a shared career experience. As an employee, you might not love a Glorious Bastard—in fact, you might swear at him under your breath—but you will absolutely respect him. And since Glorious Bastards put your career on the fast track, you’ll thank your lucky stars you had the chance to work for them.

If you’re looking for a job or in one now, don’t write off a “tough” boss out of hand. Look for signs of gloriousness. Has this boss brought along major players in your industry? Do others express admiration and not just fear when speaking of this boss? Does this boss offer significant growth opportunities within his organization? Does he offer people the freedom to engage in creative or entrepreneurial activities? If so, then you might have a Glorious Bastard on your hands. That in turn confronts you with another question: Do you have it in you? Are you ready to be pushed to the brink and to do your best work—not just for this boss’ good, but for your own?

At the end of The Devil Wears Prada, once Miranda Priestly’s protégé has broken free of her grip, Priestly writes her an unexpectedly glowing, if not glorious, recommendation letter. This employee has been raked across the coals, and by surviving she has proven her worth. Most of us run away when we’re given an opportunity to work for a hard-driving, uncompromising boss, but that may well be shortsighted. If you can spend some time working for a Glorious Bastard, do it. It won’t be easy, and it might not be pleasant, but it’s hard to find a better way to turbocharge your career.

Sydney Finkelstein is the Steven Roth Professor of Management and Director of the Leadership Center at the Tuck School of Business at Dartmouth College. His new book is Superbosses: How Exceptional Leaders Manage the Flow of Talent (Portfolio/Penguin, 2016).

5 awesome job perks and benefits you need to negotiate

100 companies that are hiring right now