Want to see the game from up close? Here’s how you can score (no tackling required). 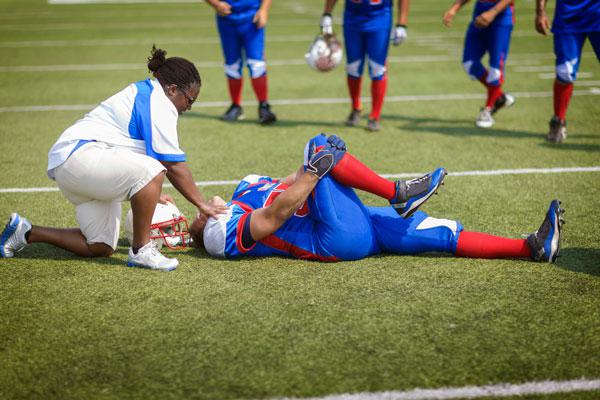 You believe football is part of life, not merely a “sport.” You throw the best tailgate party within a 50-mile radius. Championship Sunday is the most important day of the year. Unfortunately, you happen to lack the otherworldly size, physique and speed of today’s football players, putting the odds of you actually playing for your favorite team, well, nonexistent.

Don’t despair! There are a number of jobs that could get you to close to the action—really close.

Using data from the Bureau of Labor Statistics and PayScale.com, Monster rounded up 10 career paths that could someday get you in the game and make you part of a winning team.

What you’d do: You don’t have a game without the players! Scouts research, observe and recruit promising young athletes to the big time. This can mean scouting high school players for college teams, or scouting college players for pro teams. A lot of time is spent on the road, watching games, compiling statistics and negotiating deals between teams and potential players.
What you’d need: A bachelor’s degree is generally a minimum, with extensive knowledge of the game as an additional must-have.
What you’d make: $31,000 per year

What you’d do: An athletic trainer is the miracle worker who keeps players in peak condition, or as close to it as possible. They help athletes avoid injury, and work with the wounded to diagnose and treat whatever issues they’re facing.
What you’d need: A bachelor’s degree is generally a minimum, with an emphasis on physiology. Most states also require licensing or certification.
What you’d make: $44,670 per year

What you’d do: Engineers handle the behind-the-scenes work so that radio and TV broadcasts before and during the game go off without a hitch. They set up, maintain and operate the increasingly complicated technical equipment required for modern broadcasts, and may be called on to solve complex problems on the fly.
What you’d need: Postsecondary education is required, possibly a non-degree award or associate degree.
What you’d make: $41,780 per year

What you’d do: You can’t watch football without snacks and a good beverage, right? Whether at a counter or prowling the aisles, concessions workers keep the fans happy with a ready supply of snacks and drinks. They need a friendly gameface and the ability to handle a heavy rush.
What you’d need: No formal education requirements; on-the-job training covers most tasks.
What you’d make: $19,040 per year

What you’d do: Beer and chili are great for tailgating, but not for scoring touchdowns. Dietitians keep the athletes’ engines running optimally with the perfect blend of fuel. They oversee meal plans to ensure the proper blend of carbs, protein, fat and flavor is delivered—and consumed in the right quantities—to maintain strength and proper weight in players.
What you’d need: A bachelor’s degree and internship is generally a minimum. Many states require licensing.
What you’d make: $57,910 per year

What you’d do: Just as a scout finds and signs the team’s players, HR people hire the off-the-field stars that help keep the organization running smoothly. So while HR associates generally aren’t making draft picks, they do play the key role of building a winning roster.
What you’d need: A bachelor’s degree in a field such as business or HR is generally a minimum requirement. View a sample resume for an HR generalist.
What you’d make: $58,350 per year

What you’d do: Referees fill a largely unappreciated role—they’re generally only visible for their mistakes. Refs have to be athletic enough to be in the right position to make calls without getting in the way, sharp enough to enforce the rules in a split second without the benefit of a video replay and thick-skinned enough to take the criticism of thousands of fans.
What you’d need: Formal education generally isn’t a requirement; knowledge of their sport’s rules and certification generally is the baseline.
What you’d make: $24,870 per year

What you’d do: Football can get tense, even emotional. And in order to keep the peace, stadiums have to hire security officers who handle crowds outside the stadium, in the stands and on the field, making sure everybody is safe and having a good time.
What you’d need: A high-school diploma is usually the starting point, although training in technology may be required for working with video surveillance equipment. View a sample resume for a security guard.
What you’d make: $24,680 per year

What you’d do: Come game day, tens of thousands of fans eagerly flood the stadium gates. Stadium ushers help everyone find their seats in an orderly fashion. They can also act as an early-warning system for security to deal with any potential issues in the stands.
What you’d need: No formal education requirements. Communication skills and friendliness are highly emphasized.
What you’d make: $8 per hour

What you’d do: Statisticians are a walking source of numbers, obscure or otherwise, that can be passed along to the media whenever the time is right. They can work for the team itself or for any of the media outlets covering a game. When a receiver breaks the record for the most yards in a single quarter of a game, the statistician knows it and spreads the word.
What you’d need: A bachelor’s degree is a start, and a master’s in a field such as statistics or mathematics may be required.
What you’d make: $80,110 per year