10 companies that really care about their older workers

The older you are, the harder it can be to find a job—but not at these top-rated companies. 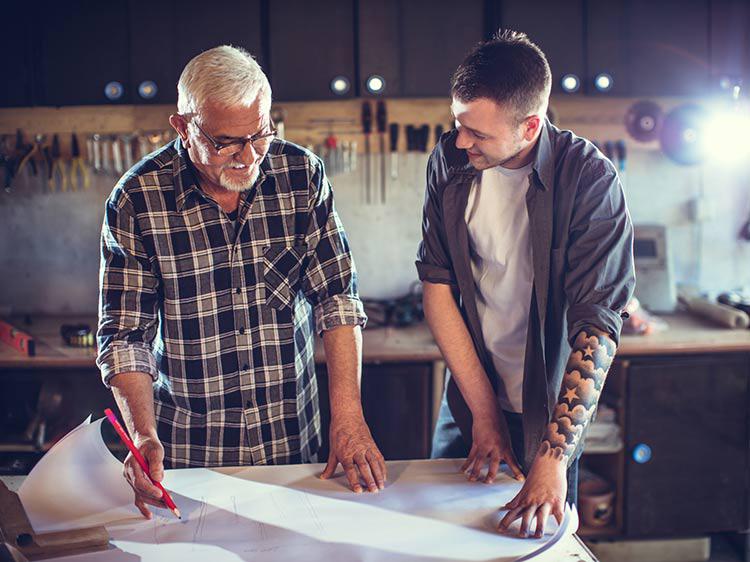 We’re getting older and working longer, but that doesn’t mean finding a job is getting any easier.

While the number of seniors aged 65 and older within the working-age population is projected to increase from 19% to 29% by 2060, new research suggests that once you’re over the hill, so to speak, you still have an uphill battle ahead of you. A 2017 study by the San Francisco Federal Reserve Bank found that employers regularly overlook the resumes of middle-aged and older workers, pointing to a trend of age discrimination in hiring.

Fortunately, that’s not the case for all companies. Some best-in-class employers understand the value, wisdom, and insight older workers can bring to the workforce—like being great mentors, or even mentees, especially if they come with the same level of enthusiasm as this 72-year-old intern.

Recently, Monster partnered with employee-review platform kununu to identify the workplace factors that workers rate as most important to their job satisfaction. Using kununu’s star rating system—1 (low) to 5 (high)—we identified the top companies with a 4-star rating or higher for friendliness toward older colleagues and then rounded up the jobs they’re hiring for on Monster.

The winners range from retailers to manufacturers and everything in between. But don’t just take our word that these companies care about their older workers. Take it from the people who know best: current and former employees who left reviews on kununu’s site. See if one of the companies below would be a good fit for you.

What they do: As one of ADT’s oldest and largest authorized dealers, SafeStreetsUSA sells and installs home security and alarm systems.

Why they’re on the list: At SafeStreets, age isn’t taboo—it’s actually celebrated. Just ask reviewers, who say, “Age diversity is obvious and considered a strength by all. Fresh ideas and energy being mentored by wise and experienced guides.”

Find all jobs at SafeStreets on Monster.

What they do: Aptive Environmental provides pest control services in 24 states.

Why they’re on the list: “The respect for elders here is off the charts,” according to reviews on kununu. As one reviewer put it, “It’s awesome to learn from the older employees within the office. They really care about curating the next generations.”  But regardless of age, reviewers seem to agree that “people here are really friendly and kind-hearted.”

What they do: Liberty Tax Service is the third largest tax preparation franchise in the U.S.

Why they’re on the list: “All employees are appreciated and supported,” at Liberty Tax Service, but when looking at older workers at the company, reviewers say, “they have more knowledge in areas we need” and “they are a great help.” One reviewer even mentioned their older colleague, a 72-year-old veteran, specifically, saying, “He is a great worker, and [I] have so much respect and admiration toward him.”

Find all jobs at Liberty Tax Service on Monster.

What they do: OMNI Systems is one of the largest, privately owned label converters in the U.S.

Why they’re on the list: “Everyone is welcome, appreciated, and accepted as part of the team,” say reviewers at OMNI Systems. This doesn’t come as much of a surprise, considering OMNI Systems was named the top company for worker satisfaction earlier this year, as a large part of what makes this company such a great place to work is the value the company places on its workers’ years of experience—and how it can benefit the greater workforce. “Senior colleagues are valued. Most often, they become mentors to younger operators.”

Find all printing jobs on Monster.

What they do: Franklin International manufactures and sells adhesives, sealants, and polymers for commercial and industrial wood products.

Why they’re on the list: When you work at Franklin International, you work for life. OK, maybe that’s not quite true, but reviewers do say “many people work here until 70+.” Why? Perhaps it’s because the company offers “great programs for phased retirement and part-time work” as well as “Good retiree medical benefits.”

What they do: With a keen interest in sustainable fashion, H&M is one of the word’s leading fashion companies, operating more than 4,500 stores across the globe.

Why they’re on the list: The clothes at H&M may cater to a younger demographic, but that doesn’t mean the company turns its nose up to workers with several more years under their belt. Reviewers say older colleagues are “treated like any other employee” at H&M.

What they do: GAO is a legislative branch government agency that provides auditing, evaluation, and investigative services for Congress.

Why they’re on the list: GAO advises Congress and heads of executive agencies about how to make government more efficient, so naturally, the company places high value on the wisdom and insight an older employee can bring to the workforce. While none of the reviewers specifically talked about the company’s attitude towards older colleagues, the company does boast over a 4.5-star rating in this category on kununu.

Find all government jobs on Monster.

What they do: Wegmans is a family-owned supermarket chain, with 94 stores based in New York, New Jersey, Pennsylvania, Maryland, Virginia, and Massachusetts.

Why they’re on the list: Working at Wegmans as an older employee is a great way to stay active post-retirement. Reviewers say Wegmans loves to “hire older workers, including those who retired and want to work part-time.”

Find all jobs at Wegmans Food Markets on Monster.

What they do: TJX is an international fashion and home décor retail conglomerate, which owns the Marshalls, HomeGoods, T.J. Maxx, and Sierra Trading Post brands.

Why they’re on the list: According to reviewers, at TJX, “there is a wide range of ages at our locations.” What would you be doing on the job? Reviewers say, “Most of the older people work [the] fitting room or registers.” One reviewer even mentioned their older colleagues who work in the fitting room, saying, “They are sweet, amazing ladies and are loved by all.”

Find all jobs at TJX Companies on Monster.

What they do: Nike is an international athletic apparel and sporting goods manufacturer and retailer.

Why they’re on the list: Nike’s mission is to keep people active—and apparently that goes for the job market, too, as Nike works to keep older colleagues happy, working, and active within the company. While none of the reviewers specifically talked about the company’s attitude towards older colleagues, the company does boast an impressive 4.5-star rating in this category on kununu.

Find all jobs at Nike on Monster.

The Monster-kununu Workplace Happiness Index includes industry data provided by kununu from November 17, 2016  to November 17, 2017. Reviews on kununu are broken down into 18 key dimensions of workplace satisfaction with each dimension assigned a star rating. The above information takes into account the average of those ratings over a 12-month period. Only companies with a minimum of 10 reviews were considered.