How I became an airline pilot

Nathan Racine has a job most people dream of: He gets paid to travel. For him, the sky’s the limit. 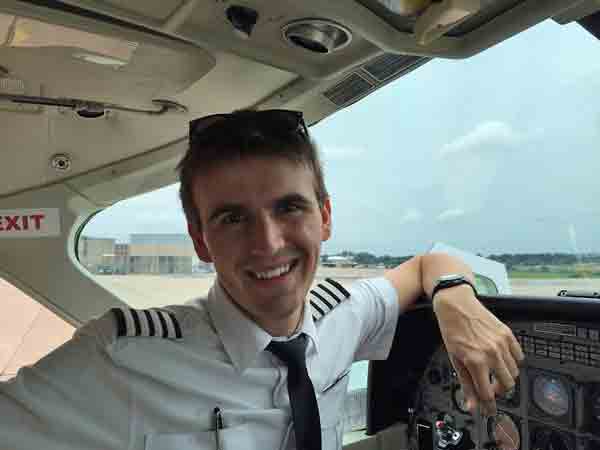 Airline pilot Nathan Racine's favorite job perk : "I love that I always seem to get a window seat."

Nathan Racine’s job is about getting people from point A to point B. He does it by means of travel he’s quite passionate about—aviation.

“The life of an airline pilot is sensational,” he says. “You see the world. You get to visit places you never thought you would go and rarely stay anywhere long enough to get bored. Plus, I love that I always seem to get a window seat.”

Racine, 23, is an airline captain for Air Choice One based out of St. Louis, Missouri.

For him, this job fulfills a lifelong passion. He says he’s been fascinated by planes since he was a child: “My parents took me on a sightseeing flight and the pilot let me sit with him,” he recalls. “The second he started the engine, I knew I wanted to fly.”

As an airline pilot, Racine flies and navigates airplanes transporting people and cargo on a fixed schedule.

For young pilots like Racine, the opportunities are as wide as the open sky. While the actual number of jobs is predicted to decline 7% between 2012 and 2022, a lot of turnover is expected over the next seven years as a hefty number of pilots will reach the forced retirement age of 65. Right now, Airline pilots earn an average annual salary of $102,000 according to PayScale.

We caught up with Racine before he put his wheels up to find out what life is really like in the cockpit.

How he got into aviation

Racine started flight school while attending high school in Canton, Ohio. You don’t have to be a particular age to start training to become an airline pilot, but you can’t fly solo until you’re 16 or receive certification until age 17, according to the Aircraft Owners and Pilots Association.

In order to be paid to fly, one must have a commercial pilot’s license from the Federal Aviation Administration. Airline pilots are also required to receive an Airline Transport Pilot certificate, according to BLS.

Though not required, most airlines prefer a college degree in a relevant field. Racine earned a degree in air traffic control and flight safety from Embry-Riddle Aeronautical University in Daytona Beach, Florida.

Air Choice One is Racine’s first job, an opportunity he earned through networking with a fellow pilot.

The average day for a pilot is contingent upon their seniority.

“When you’re new, you’re typically on call. You may be at home one minute, then, three hours later, you’re flying from Denver to Cheyenne,” explains Racine, who usually flies to multiple cities in a day.

Every day he has a different route. One day might start in Los Angeles and end in South Dakota with a layover in Denver.

In addition to flight training, Racine says teamwork and a positive mental attitude are important skills.

“On rough days, being positive becomes a skill and is critical in this industry,” he says. “Positivity is one means of establishing an open line of communication and creates a healthy work environment.”

Additionally, being a people-person is helpful since pilots work with many different people who should feel comfortable approaching you. Racine explains it’s critical for one’s co-pilot to feel comfortable sharing every flight related concern for safety.

What he says are the biggest challenges

The challenges pilots face are rarely the same each day, he says.

His career advice for aspiring pilots

Racine wants young pilots to know that getting their first job could be the hardest part.

He used his degree to explore other areas of aviation so he understands more about what happens outside the cockpit. This gave him a tremendous respect for air traffic controllers and a skill that could lead to other opportunities down the line.

Above all, Racine advises pilots in training to have fun. "The funny thing about having a goal is that we seem to focus on what we want that we forget to enjoy what we have,” he says. “Enjoy flight training. You'll make it to your dreams one day.”