Looking to intern in the film industry? This sample resume shows how to pitch your skills and classroom training in a way that will get you noticed. 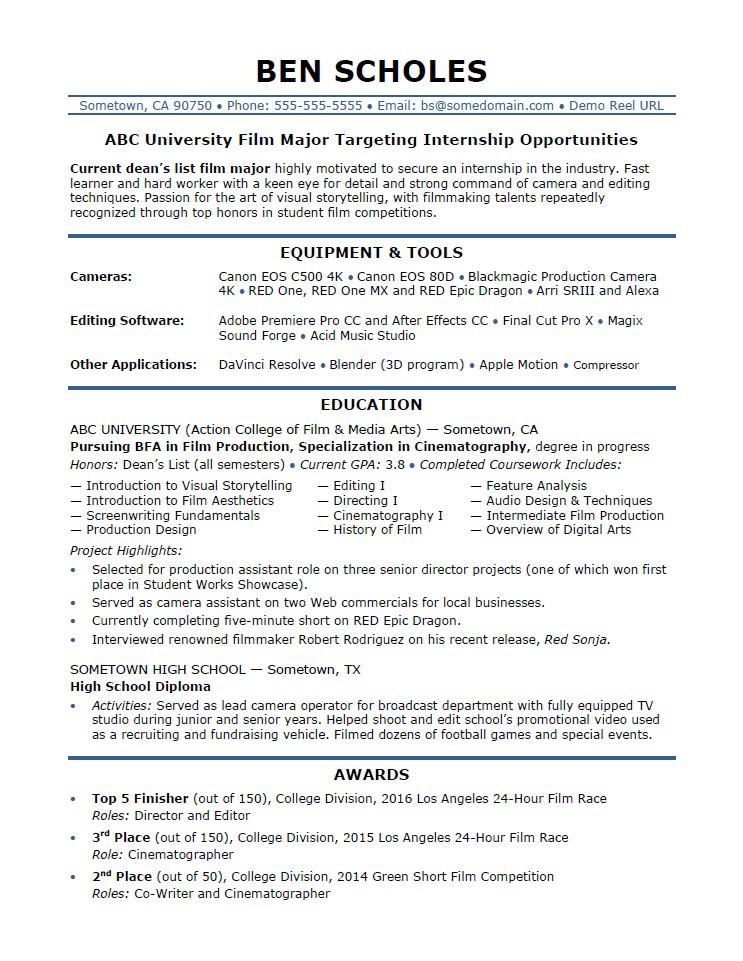 Looking to get into the film industry? An internship is a great way to start. In fact, the National Association of Colleges and Employers Job Outlook 2018 survey found that employers prefer to hire candidates who have completed internships or cooperative education assignments. Film internships are a great way to kick off your career. For inspiration, view our internship resume sample below to see how to pitch your skills and classroom training, and download the film industry internship resume template in Word.

Jobs in film production are projected to grow by 13% (or 7,600 jobs) from 2016 through 2026, which is faster than average, according to the Bureau of Labor Statistics (BLS). You'll find the highest level of employment for this job in the following states: California, New York, Florida, Georgia, and Texas; and in the following metropolitan areas: Los Angeles, New York City, Atlanta, San Francisco, and Miami.

Additionally, you can search for internships on Monster.

Current dean’s list film major highly motivated to secure an internship in the industry. Fast learner and hard worker with a keen eye for detail and strong command of camera and editing techniques. Passion for the art of visual storytelling, with filmmaking talents repeatedly recognized through top honors in student film competitions.

Put your career in action

Just like you need to hustle on a film set, you need to do the same for your career, especially when you're first starting out. An internship is a great way to learn the ropes and impress directors and agents. A solid resume will help you get your big break. Could you use some help with that? Get a free resume evaluation today from the experts at Monster's Resume Writing Service. You'll get detailed feedback in two business days, including a review of your resume's appearance and content, and a prediction of a recruiter's first impression. Think of it as an awesome sizzle reel for your job search.

See More Internships
Back to top