How to Become a Police Officer

Wondering what it takes to get into this demanding job? Here's a guide to the education and training you'll need. 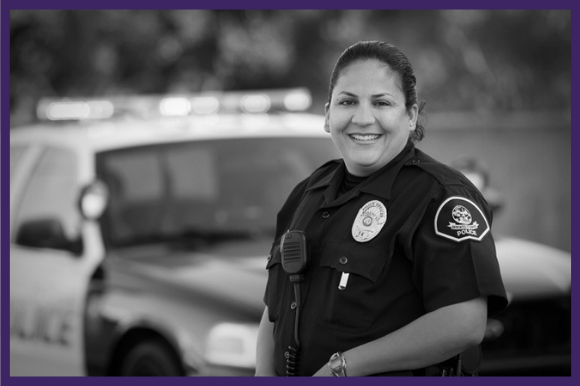 Learn the steps to become a police officer.

If you’ve ever dreamed of joining the ranks of our men and women in blue, now’s the time to make your move. According to the National Police Foundation, 86% of police departments nationwide are experiencing an officer shortage. Learn how to become a police officer and serve not only yourself, but also the greater good.

Aspiring police officers must meet certain education requirements and graduate from a police-training academy before they receive a badge. Here’s everything you need to know about how to become a police offer, what the work is actually like, and job and income potential.

What do police officers do?

Don’t believe what you see on the TV show “Cops”—it’s not an accurate depiction of police work.

“At the core level, a police’s officer primary job is to patrol a section of the community in order to make the community feel safe,” Vincent says, “as well as to respond emergency calls for anything from suspicious behavior to felony crimes.”

In addition to patrolling their assigned areas, police officers typically conduct traffic stops and issue citations, observe suspects, and testify in court against criminal defendants. They also spend a fair amount of time at their desk doing paperwork, such as writing detailed crime reports and filling out forms. Check out Monster’s police officer job description for more info.

Work hours can vary depending on the police department. Arlington County police officers are assigned to one of three eight-hour shifts, while “police stations in smaller communities may only have two 12-hour shifts,” Vincent says.

However, “We offer an opportunity twice a year for officers to change shifts,” Vincent says. “That’s our system because research shows that poor sleep patterns can [negatively] affect job performance.” For that reason, police officers also usually have the same days off every week, Vincent says: “We’ve found that some officers prefer the midnight shift because they’re night owls.”

As for the work environment, Vincent says there’s inherent stress in any public safety job: And on top of being physically demanding, police work can be stressful and dangerous—police officers may suffer physical injuries during conflicts and other high-risk situations. Therefore, officers must possess the physical and mental stamina to perform their job.

Education requirements for how to become a police officer range from a high school diploma to a college degree, depending on a police department’s jurisdiction. For example, you may have to have a high school diploma and obtain a specific number of college credits. That said, “68% of our police officers have their bachelor’s degree,” Vincent says.

How long does it take to become a police officer?

Police academy requirements vary, but by no means does training happen overnight, Vincent says. Note that the process and requirements may vary from region to region.

For example, if you want to join the Los Angeles Police Department, you must complete seven steps. You fill out their online application and then take a written test. You them submit a personal history statement, which will be used as part of your background investigation. Next you must attend the Candidate Advancement Program and complete the Physical Fitness Qualifier. You’ll then take a polygraph and sit for a panel interview, followed by medical evaluation, field investigation (a sort of records check), and psychological evaluation.

Police academy programs, which take anywhere from 12 weeks to a year to complete, comprise a variety of coursework, from criminal law to cultural awareness to physical and firearms training.

Police departments in other regions also require basic training. After graduating from the police academy, agents typically receive in-house training at their police station, “where we indoctrinate you into how we do things, which could be something as simple as learning how to use our internal database,” Vincent says. Finally, new officers work with a field-training officer on shifts.

“I tell people that if I recruit you to attend the police academy,” Vincent says, “it’s probably going to be close to a year of training before you’re on the street in a police uniform working alone.”

For officers who have put in some years on the streets, there's potential mobility in several directions. Veterans can move up the ranks to become a sergeant, lieutenant, or even chief, among other positions, or they can specialize in crime lab work or become a detective. Many of these promotions and specialties require advanced education. A criminal justice school in your region will have more information.

How much do police officers make?

How to find a police officer job

As for where the jobs are, according to the BLS, these are the top five states with the most job openings. Click through to find job opportunities on Monster:

Now that you’ve learned how to become a police officer, it’s time to stay up to date on job information. Need some help? Join Monster for free today. As a member, you can upload up to five versions of your resume—each tailored to the types of law enforcement jobs that interest you. Recruiters search Monster every day looking to fill top jobs with qualified candidates, just like you. Additionally, you can get job alerts sent directly to your inbox to cut down on time spent looking through ads. Let Monster deliver great opportunities to you today.