View this sample resume for an actor, or download the acting resume template in Word. 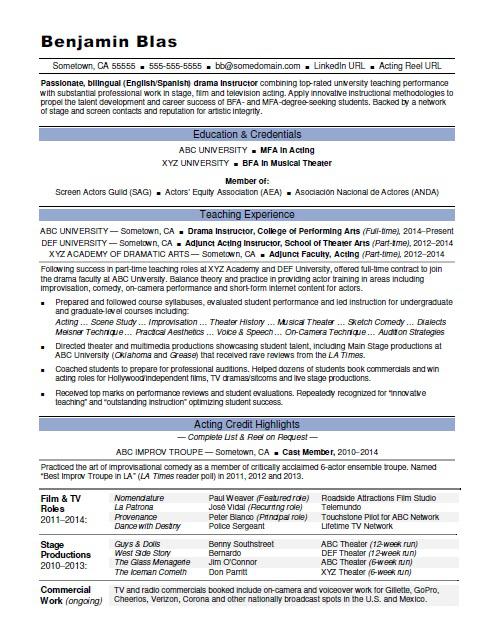 Like a movie script, a winning resume tells a compelling story—and you’re the lead actor or lead actress hoping for the role of a lifetime. To be a successful candidate for acting gigs, resume expert Kim Isaacs says it helps to have a superstar resume. To see how you can land the part, view this sample resume for acting that Isaacs created below, or download the acting resume template in Word.

Jobs for actors are projected to grow by 12% (or 7,400 jobs) from 2016 through 2026, which is faster than average, according to the Bureau of Labor Statistics (BLS). You'll find the highest level of employment for this job in the following states: California, New York, Illinois, Georgia, and Texas; and in the following metropolitan areas: New York City, Los Angeles, Houston, Chicago, and Atlanta.

As an actor, you can expect to earn a median wage of $17.49 per hour, according to the BLS.

Additionally, you can search for acting jobs on Monster.

You wouldn't take the stage without practicing your lines, right? Well, don't send your acting resume out on a job search without ensuring its lines are ready for the spotlight. Could you use some help with that? Get a free resume evaluation today from the experts at Monster's Resume Writing Service. You'll get detailed feedback in two business days, including a review of your resume's appearance and content, and a prediction of a recruiter's first impression. It's a quick and easy way to get your resume into job-search character.